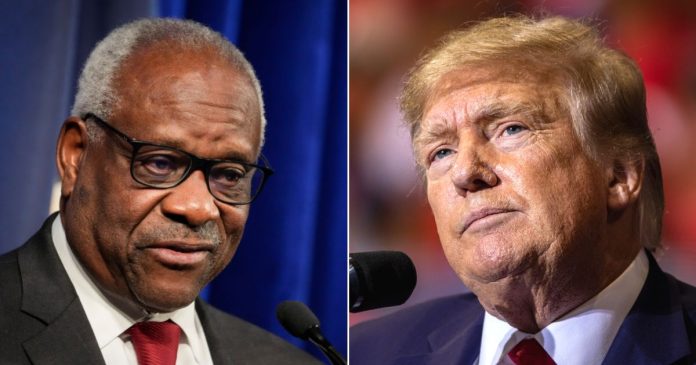 November 12, 2022
Reading time: 5 min.
Facebook
Twitter
Pinterest
WhatsApp
Supreme Court Justice Clarence Thomas has given the Biden administration until early next week to respond to a legal filing from former President Donald Trump asking that a special master assigned to the case be allowed to review dozens of documents seized in the FBI raid on his Mar-a-Lago property in Palm Beach, Florida.Trump filed an emergency request with the court on Tuesday, prompting Thomas to seek a response from the Biden administration’s Department of Justice.

As noted by Axios, Thomas was the justice responding because he is designated to oversee emergency appeals from the 11th Circuit.

Last month, Judge Aileen Cannon of the U.S. District Court for the Southern District of Florida appointed retired federal Judge Raymond Dearie as a special master to review documents seized in the Aug. 8 raid, banned the Justice Department from using those in any investigation until that review is completed, and said all documents seized — including those marked classified — should be reviewed by Trump’s attorneys.

The Justice Department appealed the parts of the order that covered a ban on using the documents and sharing what it says are 100 classified documents with Trump’s attorneys.

An order from a three-judge panel of the 11th U.S. Circuit Court of Appeals gave the DOJ a total victory, saying it could use documents seized in its raid on Mar-a-Lago as it investigates the former president.

The ruling also meant the Justice Department could keep Trump’s attorneys in the dark about the contents of documents that are marked classified during a review of the seized documents by the special master.

Trump’s emergency appeal said the appellate court went beyond its jurisdiction in keeping documents from his lawyers.

“Indeed, all that was before the Eleventh Circuit was the Injunction Order, which contained only the District Court’s statement of prospective intent regarding the appointment of a special master, but specifically did not set forth the Special Master’s duties and scope of review,” the filing from his attorneys said.

The filing said the appellate order is effectively compromising the integrity of the well-established policy against piecemeal appellate review and ignoring the district court’s broad discretion without justification.

“Moreover, any limit on the comprehensive and transparent review of materials seized in the extraordinary raid of a President’s home erodes public confidence in our system of justice,” Trump’s lawyers argued.

“The unprecedented circumstances presented by this case — an investigation of the 45th president of the United States by the administration of his political rival and successor — compelled the district court to acknowledge the significant need for enhanced vigilance and to order the appointment of a special master to ensure fairness, transparency and maintenance of the public trust,” the filing said.

In its reporting, Politico noted how the filing fits with Trump’s strategy.

Allowing a full review of the 100 documents marked classified “would make it easier for Trump to continue to pursue claims that those documents — some marked ‘Top Secret,’ or with even more restrictive classifications — should not be in the hands of Justice Department investigators because they are subject to executive privilege, because Trump declassified them before leaving office, or for other reasons,” the outlet said Tuesday.

Although Trump has said he declassified the documents, attorneys so far have not produced documents saying that he did so.

In its ruling last month that prompted Trump’s appeal, the 11th Circuit Court of Appeals touched on the issue.

The appeals court said that “at least for these purposes, the declassification argument is a red herring because declassifying an official document would not change its content or render it personal. So even if we assumed that Plaintiff did declassify some or all of the documents, that would not explain why he has a personal interest in them.”

Thomas asked that the DOJ respond to Trump’s emergency request by 5 p.m. EDT on Tuesday.

Jack Davis is a freelance writer who joined The Western Journal in July 2015 and chronicled the campaign that saw President Donald Trump elected. Since then, he has written extensively for The Western Journal on the Trump administration as well as foreign policy and military issues.