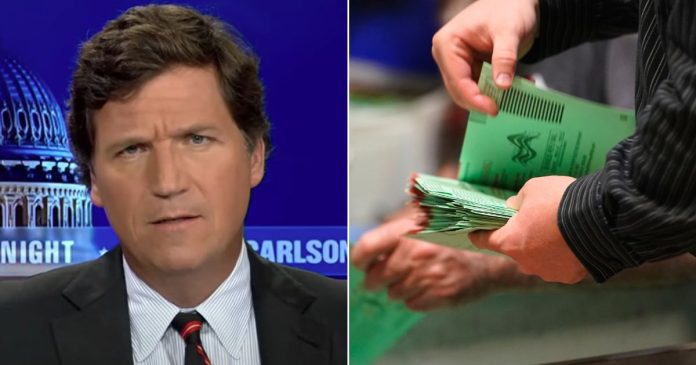 November 11, 2022
Reading time: 7 min.
Facebook
Twitter
Pinterest
WhatsApp
You may have noticed a distinctly American trend in the past decade or so: Holidays are getting longer.Halloween now lasts all of October. The moment the calendar gets turned over to November, Christmas begins. Thanksgiving, also elongated, now takes place alongside its bigger tinsel-bedecked cousin, not before it. By the time Santa Claus closes out the Macy’s Thanksgiving Day Parade on Nov. 24, Jolly Ol’ Saint Nick will have been around for the better part of a month.

We can now add Election Day to the mix. Or should we call it Election Week? Election Month?

I’m old enough to remember when all the races were called on the night thereof — or maybe early the next morning.

When George W. Bush and Al Gore engaged in the Battle of the Hanging Chad back in 2000, that was an unusual novelty based around a razor-thin margin in one state. We’d never seen anything like it.

Now, decisive races in swing states and districts being called on Election Day are hardly the norm.

Who controls the House or Senate? We have a good idea that the Republicans will control the former and the Democrats are favored to control the latter, but as I write this on Friday morning, America doesn’t know. A lot of it depends on two swing races in Arizona and Nevada where electoral chaos has reigned since early on Tuesday.

Why is this an issue? As Fox News’ Tucker Carlson noted on his Thursday show, “democracy is a faith-based system” — and if elongated vote counts debase that faith, we’re in trouble.

Take the state of Arizona, for instance.

“Forty-eight hours after the voting stopped, there are still 633,000 ballots still uncounted in Arizona,” Carlson said. “More than 400,000 of those are in Maricopa County. … When will we know the results? Last night, election officials claimed they’d have a new tally for us by 8 p.m. Eastern, the beginning of our show, but the deadline came and went.

“By the end of the night, they had finished counting fewer than 70,000 more votes. Then they said they’d have final totals by Friday, tomorrow, but no. Today, the county officials said they don’t expect to announce the results of the elections until next week at the earliest.”

In Arizona, both the race for Senate and for the governor’s mansion have yet to be determined. With 82 percent of the vote counted as of Friday morning, incumbent Democratic Sen. Mark Kelly led GOP challenger Blake Masters by 5.6 points, while Democrat Katie Hobbs led Republican Kari Lake by 1.6 percent in the gubernatorial race.

It’s not like Maricopa County shouldn’t be able to count their votes, Carlson said.

BREAKING: Reports out of Maricopa county of Machines “not working” and ballots being “misread”

WHAT IS GOING ON?

“It’s not a resource problem, certainly,” he said. “The budget of Maricopa County is about $4.5 billion a year. For perspective, the entire Hoover Dam cost $890 million to build, and yes, that is in adjusted dollars. So for the price of five Hoover Dams, Maricopa County can’t even count the ballots in a single statewide election in a country that claims to care about democracy.

“They can’t even manage to let people vote on Election Day. On Election Day, according to the county, 70 of 223 polling places suffered major problems with voting machines — machines the county paid millions for just recently — and their failure disenfranchised mostly Republican voters who wanted to cast their ballots in person.”

This led to voters waiting in line for hours in Maricopa County — and that’s not all.

“One poll worker reported that 25 percent of ballots were being rejected. Now you would call that third-world, but actually it’s beneath third-world. Most third-world countries have serious elections. They require voter ID. They don’t wait days for election results in Ghana.”

It’s not just Arizona, either.

“Clark County, Nevada, the home of Las Vegas, says there are still tens of thousands of ballots left to count. Therefore, we’re not going to know what happened in the election until Monday, we hope,” Carlson said.

And it’s not just the Senate.

“Key House races all along the West Coast of the country in California, Oregon and Washington state are still unsettled tonight,” the Fox News host noted. “They’re saying they haven’t counted the votes. Really? What is this? Is this fraud?”

There’s one reason why you might think it’s fraud, after all.

“In cases where there was chaos and delays in vote-counting over the past several election cycles, what percentage of the ultimate winners turned out to be Democrats?” Carlson said.

“Now, in a fair system, you would think the proportion would land somewhere around 50 percent, a coin toss,” he said. “But we checked. Oh, and that’s not the case. In 13 recent races, we looked at where election delays were well-publicized, 10 of them ultimately went to the Democrat, 10 out of 13 — 77 percent. It’s not a coin toss. It’s a very high average.”

This included a number of House seats during the 2018 election cycle in Orange County, California, where most of the GOP candidates had sizable leads on Election Day and then saw them disappear — thanks, in part, to a Democratic Party ballot-harvesting operation that led to up to 250,000 vote-by-mail ballots there, Carlson noted.

However, he maintained that “it doesn’t matter” if fraud was involved or not.

“What we know is that the mechanics of our elections are not working almost exclusively in states and cities run by Democrats,” he said. “Are they cheating? Are they disorganized? Again, not relevant.

“The system is obviously out of control. It’s flaky, and systems like that cannot be, by definition, reliable. Would you let a Maricopa County elections official fly your aircraft? Probably not. That’s a disaster.”

“Democracy is a faith-based system,” Carlson said. “You have to believe in it in order for it to work, but who could believe in this?”

The fallout from the Christmas season starting on Nov. 1 is limited to, among other things, a generalized fear and loathing of Mariah Carey. There are deeper problems when we drag out the counting in elections, particularly when one party insists the other swear upon a stack of mail-in ballots that the process is transparent, efficient and fraud-free.

On the first two counts, we can plainly see that it isn’t. On the third count, we don’t know and aren’t allowed to ask. (If only Diebold were still around. Then, questioning elections wouldn’t just be allowed, it would be fashionable.)

The last few months of the year already have enough long holidays. Voting needn’t be one of them.

The 2022 midterms should be a wake-up call to everyone: It isn’t “MAGA Republicans” or “election-deniers” who are killing faith in the electoral system, it’s the incompetence of the people who run it.