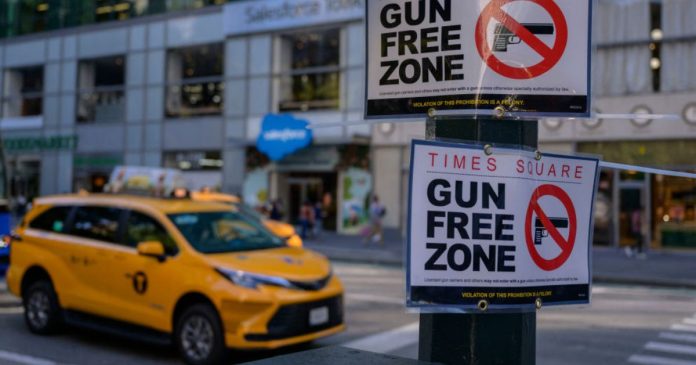 November 10, 2022
Reading time: 5 min.
Facebook
Twitter
Pinterest
WhatsApp
Calling it “patently unconstitutional,” a federal judge on Monday gutted New York state’s anti-gun legislation in issuing a preliminary injunction against core elements of the law, which was passed this summer after a previous law was thrown out by the Supreme Court.U.S. District Court Judge Glenn Suddaby of the Northern District of New York issued a preliminary injunction on Monday, according to Reuters. As of Tuesday, when Democratic Gov. Kathy Hochul, an architect of the law, is fighting for re-election against Republican challenger Rep. Lee Zeldin, it was uncertain whether the state would appeal.

The ruling said the law was filled with “unprecedented constitutional violations.”

“The subjective and vague standard of ‘good moral character’ could allow licensing officers to deny an application if they were to see reflected in a compulsively disclosed social-media handle any hobby, activity, political ideology, sexual preference, or social behavior that they personally deem to show bad ‘temperament’ or ‘judgment,’” Suddaby wrote.

“Upon closer examination, the Court finds that this regulation’s burdensomeness on law-abiding responsible citizens (their subjection to the unbridled discretion of licensing officers to determine what information is “reasonably necessary and related to the review of the licensing application” without any limitation regarding whether that information is to be communicated orally as opposed to in writing) does not appear to be reasonably proportionate to the burdensomeness of the relevant historical analogues (which required merely a few character references), especially given the dearth of evidence adduced by the State Defendants for this unbridled discretion,” he wrote.

Suddaby rejected the state’s claims that the new law fits with the historical pattern of gun regulations.

Suddaby rejected the law’s effort to ban licensed gun owners from carrying weapons at restaurants that serve alcohol, theaters, protests, places of worship, banquet halls or conference centers, parks, areas at airports or clinics before security checkpoints, and public buses, which the law had dubbed “sensitive places.” He upheld the law’s ban on guns at polling places, schools, and courthouses.

Did this judge get it right?

Suddaby ruled that “expanding the category of ‘sensitive places’ simply to all places of public congregation that are not isolated from law enforcement defines the category of ‘sensitive places’ far too broadly. Respondents’ argument would in effect exempt cities from the Second Amendment and would eviscerate the general right to publicly carry arms for self-defense.”

Suddaby rejected the law’s ban on carrying a gun on private property except when explicitly allowed by the owner.

The new law “appears to compel Plaintiffs’ speech another way: by coercing them, as busy store owners, to conspicuously speak the state’s controversial message (visible to neighbors and passersby on the sidewalk or street) if (1) they want to welcome onto their property all license-holding visitors who the State has spooked with a felony charge,  but (2) they are otherwise unable to give express consent to those visitors for some reason (say, because as small-business owners they do not enjoy the luxury, or possess the superhuman endurance, of being able to sit at the front entrance to their property twenty-four hours a day, seven days a week, twelve months a year),” he wrote.

The ruling left in place the law’s training requirement.

Suddaby rejected many of the arguments put forth by the state.

“For the sake of brevity, the Court will not expound on why it finds that barring some people from openly carrying rifles on other people’s farms and lands in 19th century America is hardly analogous to barring all license holders from carrying concealed handguns in virtually every commercial building now,” he wrote.

Elsewhere, he noted that “the Court finds itself in a paradox created by a regulation that prevents a license holder from possessing a handgun while gathering with individuals to collectively express their right to protest the regulation by possessing handguns,” he wrote.

“Just like we warned politicians after the Bruen decision, fall in line, or we will force you to. We are excited to see Kathy Hochul finally served a plate of humble pie, and we are fully prepared to continue the fight should she again attempt to disarm the citizens of her state at a time when her party’s policies are only escalating the danger that everyday citizens face,” he said, referring to the June Supreme Court decision that tossed out New York’s former gun laws.

Jack Davis is a freelance writer who joined The Western Journal in July 2015 and chronicled the campaign that saw President Donald Trump elected. Since then, he has written extensively for The Western Journal on the Trump administration as well as foreign policy and military issues.