18-Year-Old Republican Elected to County Council in Maryland: 'It's Not About Age, It's About Results' 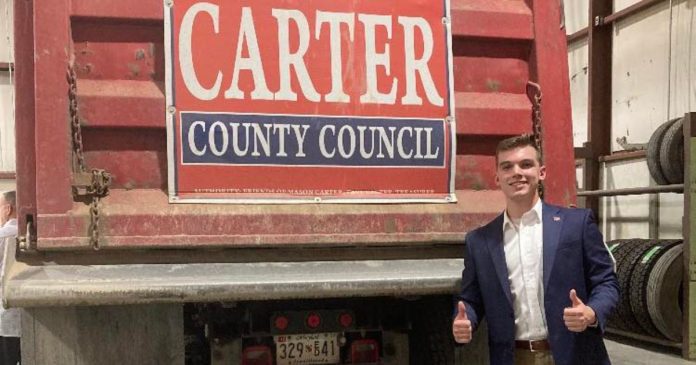 November 10, 2022
Reading time: 3 min.
Facebook
Twitter
Pinterest
WhatsApp
An 18-year-old Republican community college student will be joining the Frederick County Council next year after winning his election by the largest margin of anyone running for an open council seat on Tuesday.With 100 percent of the vote counted, unofficial election results reported by the Maryland State Board of Elections had Mason Carter over Democratic opponent Julianna Lufkin by a margin of more than 2-to-1.

“The voters in Frederick County’s District 5 have chosen Mason Carter to represent them on the Council,” she wrote on Facebook. “I wish Mason all the best.”

Lufkin began a post in the Emmitsburg News-Journal website in February by giving her age — it was literally the first thing she said about herself after giving her name — but Carter, who described himself on Twitter as “Pro-Trump. Pro-freedom. America first,” said that age wasn’t relevant to the race.

“Everyone knows I’m young,” Carter told WTTG. “It’s easy to use the old adage as a crutch when you get older — that age is just a number … When we talked to people at their door, at events, on the street. Age didn’t come up.

Would you have voted for Carter?

The county district for which Carter and Lufkin competed had been held by council Vice President Michael Blue, according to The Frederick News-Post, a Republican. Carter defeated Blue in the June primary to win the Republican nomination for the seat.

“Along with lowering the property tax, Carter supported cutting money in the budget for county employees’ salaries and benefits,” The News-Post reported. “Lufkin, a self-employed homeschool teacher, caterer and blacksmith, supported increasing transportation options for the northern part of the county.”

“Mason Carter is a native of Frederick County, born and raised in Walkersville,” his campaign website said. “He has participated in many community sponsored organizations including Glade Valley Athletic Association and Frederick County Parks and Recreation.

“Mason became enamored with politics in 2015 when he was inspired by Donald Trump and recognized the difference real servant leadership can make and how desperately our government needs honest and direct communication with the people.”

George Upper is the former Editor-in-Chief of The Western Journal and an occasional co-host of “WJ Live,” powered by The Western Journal. He is currently a contributing editor in the areas of faith, politics and culture. A former U.S. Army special operator, teacher and consultant, he is a lifetime member of the NRA and an active volunteer leader in his church. Born in Foxborough, Massachusetts, he has lived most of his life in central North Carolina.