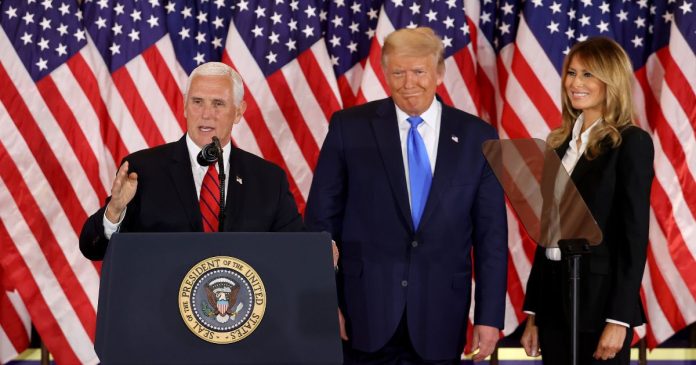 November 5, 2022
Reading time: 5 min.
Facebook
Twitter
Pinterest
WhatsApp
If there were any lingering doubts on the matter, a former Trump administration insider has confirmed that Donald Trump and Mike Pence aren’t buddy-buddy anymore.

Kellyanne Conway (@KellyannePolls) on Donald Trump and Mike Pence: “They did fabulous things for this country together for four years. It was a nasty divorce in the end, but they need to find a responsible way to co-parent the future of the Party and the conservative movement.” pic.twitter.com/cmZhD8hqA3

“They did fabulous things for this country together for four years. It was a nasty divorce in the end, but they need to find a responsible way to co-parent the future of the party, the conservative movement,” Conway said.

Conway confirmed that she remains in communication with both Trump and Pence.

The primary point of contention in Trump and Pence’s relationship is the certification of the 2020 election. Trump insisted that Pence had the power to reject the electoral college slate in his capacity as President of the Senate.

Pence ultimately declined to do so, stating that he lacked the legal authority to singlehandedly overturn a U.S presidential election.

Pence has defended this position after leaving office, admitting his fundamental disagreement with Trump on the topic.

In any event, if Pence’s differences with Trump are fueling his own flirtation with a 2024 presidential campaign, he’s setting himself up for a embarrassing loss in the Republican primary.

To be fair, all indications point to the former Indiana governor being a man of integrity and deep faith. That puts him ahead of some of his other non-Trump competitors.

To the extent that this would make him the ideal candidate to fight the establishment media juggernaut in 2024 is far less certain.

Republicans have nominated presidential candidates who frame their White House ambitions around their own personal character before, unsuccessfully.

Granted, there’s reason to believe Pence’s character is in fact stronger than someone like Mitt Romney’s. It’s a low bar to hurdle, but at least the former Indiana governor has not made himself incredibly wealthy through outsourcing middle-class American jobs.

Nor does he share the late John McCain’s irate temperament and iffy relationship history.

And yet, it’s easier to imagine Pence being vulnerable to a torrent of media slander as the main act on a presidential ticket than Trump-style “fighters.”

Conway addressed the prospect of Trump announcing a 2024 comeback presidential campaign in the same event.

The former Trump aide predicted that her former boss would make a major announcement “soon,” lauding him for waiting until after the midterms to begin campaigning for the presidency.

.@zac_weisz: “When will Trump announce his 2024 presidential bid?”

Kellyanne Conway (@KellyannePolls): “I give him a ton of credit for not announcing this year, for not stepping in the way of midterm candidates…I think you can expect him to announce soon.” pic.twitter.com/meAxNS8h9E

With midterms coming up on Tuesday, and Conway’s assertion that Trump does not want to step on any midterm candidates, that major announcement could come as soon as next week.