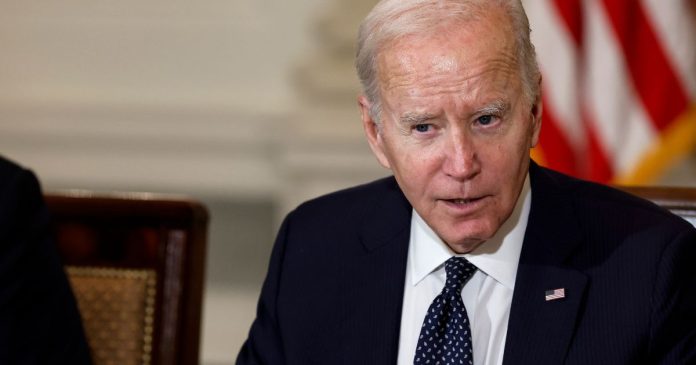 Biden seemingly babbled in imitation of the White House press corps, smiling and laughing as the media were shepherded out of the Oval Office.

Biden mocks reporters who are trying to ask him important questions pic.twitter.com/bReZhh23ky

Biden was meeting with Israeli President Isaac Herzog in the meeting. Biden discussed border negotiations between Israel and Lebanon with Herzog, with his partner touching on global security concerns related to Iran.

Biden’s staff didn’t hesitate for half a second before aggressively insisting that the media leave the office when Herzog concluded his public remarks, as seen in CSPAN footage of the meeting.

All the while, Biden enjoyed a laugh at the media’s expense.

Biden has found the spectacle of White House bouncers evicting the media from a room entertaining before. If anything, the bouncers were the loudest ones in the room, but the babbling seemed directed at the media.

Biden’s White House staff constantly uses the same badgering, demanding tone when ordering that the media depart from his presence without opportunities to ask questions.

He similarly smirked during a previous media roundup earlier this month, complaining about the press under his breath.

All the while, Biden’s hands ensured that the media left the room without time for questions.

The establishment media routinely made accusations that former President Donald Trump didn’t respect the press, even as he gave public interviews and answered questions far more frequently than Biden does.

It’s not unprecedented for the media to question world leaders and the president in the Oval Office — the Biden administration just didn’t allow it, this time.

Biden doesn’t have to worry about the media making problems related to his own lack of transparency.

There is no equivalent of Jim Acosta pulling off loud, public interruptions of Biden White House events — and Biden’s muscle would instantly escort such an individual from the premises if he proved unwilling to act with obedience in the presence of the president.

In any event, there’s a case to be made that the establishment media has enabled Biden’s tendency to hide from public scrutiny.

Perhaps they’ll realize they have no one to blame but themselves.