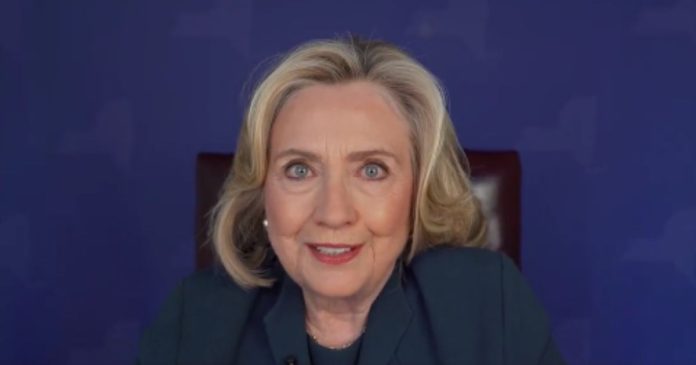 October 26, 2022
Reading time: 6 min.
Facebook
Twitter
Pinterest
WhatsApp
Hillary Clinton has been attacking “election deniers” who have questioned the results of the 2020 presidential election, calling them threats to democracy. Now she is preemptively saying that the 2024 election is already on the path to illegitimacy before the first vote is even cast.But, where is the media to call Hillary Clinton, who is already a rumored candidate for 2024, a “danger” to our democracy? Nowhere to be seen, naturally.

She also decried the “threat to our elections” posed by Republicans.

There was also a video posted to Twitter by left-wing activist group Indivisible Guide, in which the former secretary of state and multiple-time failed Democratic candidate for president Hillary Clinton claimed that “right-wing extremists” are “already” planning to “literally steal the next presidential election.”

“I know we’re all focused on the 2022 midterm elections, and they are incredibly important, but we also have to look ahead, because, you know what, our opponents certainly are,” Clinton said in the video. “Right-wing extremists already have a plan to literally steal the next presidential election, and they are not making a secret of it.”

“The right-wing controlled Supreme Court may be poised to rule on giving state legislatures,” she continued, “the power to overturn presidential elections. Just think, if that happens the 2024 presidential election could be decided not by the popular vote, or even by the anachronistic electoral college, but by state legislatures — many of them Republican-controlled.”

*taps microphone* And now an important message from Secretary @HillaryClinton!

We’re all focused on winning the midterms and defending our congressional majorities. That’s critical. But we also must take the fight to MAGA Republicans at the state level: https://t.co/3JDygMc5T2 pic.twitter.com/HPNSvnqZsK

Do you think Hillary Clinton will run for president in 2024?

When she said that “our opponents” are “looking ahead,” Hillary was talking about the upcoming Supreme Court case, Moore v. Harper, which will review how state courts interpret state election laws, specifically whether state legislatures can overrule state courts on election issues.

This is hardly the first time Hillary Clinton has been an election results denier. She has questioned the results of the 2016 election over and over again.

In 2019, for instance, she claimed Donald Trump was an “illegitimate president,” the Washington Post reported.

Clinton is not above outright lies. Just last month she made provably false claims that her private email servers had “zero” classified emails on it.

So, is Twitter going to ban Hilary Clinton for denying election results and questioning the integrity of the process with no evidence? https://t.co/WMuqoozp11

Saul Alinsky, Rules for Radicals: “Accuse your opponent of what you are doing, to create confusion and to inculcate voters against evidence of your own guilt”…”Right wing extremists already have a plan to literally steal the next presidential election.” -Hilary Clinton pic.twitter.com/CUF3bre7FL

Apparently, there has been a shift in the impressions of what is a danger to this country.

If it is POST election denialism, that is a severe threat to our democracy.

If it is a PREEMPTIVE election denial that is just sound wisdom and we all need to applaud. https://t.co/KxZMXF1qPJ

LMAO I thought elections could not be stolen??

Even as Clinton claims that Republicans are “election deniers,” she, herself, has repeatedly disavowed the results of duly certified elections. Yet the media does not highlight her hypocrisy on the issue. And now she is making a preemptive attack on an election cycle that hasn’t even started, much less one in which a single vote has even been cast.

It seems clear she is setting herself up to face the GOP nominee in 2024 — which she probably hopes will be Donald Trump — and is cajoling her supporters to see an election that hasn’t happened as illegitimate. And the media seems content to let her do it.