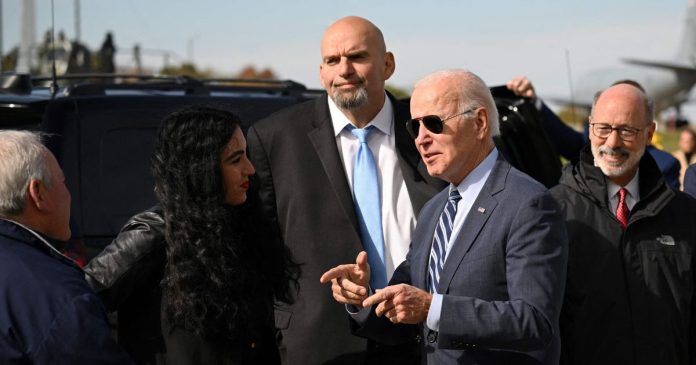 October 22, 2022
Reading time: 5 min.
Facebook
Twitter
Pinterest
WhatsApp
For months, Democratic Lt. Gov. John Fetterman of Pennsylvania has faced serious questions about his post-stroke health in his U.S. Senate race. Those questions remain despite the recent release of a “medical report” on his condition.Since he returned to the campaign trail after suffering a stroke in May, Fetterman has been delivering slurred and halting speeches filled with verbal miscues and lapses into incoherence.

Just this week, for instance, he delivered this word salad during a campaign stop: “Send me to Washington, D.C., to take on, to make sure I can push back against, work to work!”

Nothing to see here!

FETTERMAN: “Send me to Washington DC, to make sure I can… push back… against… …. Work to Work!” pic.twitter.com/t4NGWxoykA

Fetterman has been accused of being too closed-mouth about his recovery from heart surgery and a stroke, as well as lacking transparency on his health in general (not to mention being called to explain the bizarre story of how he chased down a black jogger when he was mayor of Braddock, Pennsylvania).

His health and mental acuity have come into question so strongly that even his hometown newspaper, the Pittsburgh Post-Gazette, was drawn to demand that the Democrat release a health report and take a cognitive test.

Finally, Fetterman acquiesced and released a letter from Dr. Clifford Chen on Saturday, one day after an office visit.

“Overall, the Lt. Governor is recovering well from his stroke and his health has continued to improve,” Chen wrote in his letter.

The doctor said Fetterman has returned to normal strength and coordination.

“He spoke intelligently without cognitive deficit,” Chen wrote. “His speech was normal and he continues to exhibit symptoms of an auditory processing disorder which can come across as hearing difficulty.

“Occasional words he will ‘miss’ which seems like he doesn’t hear the word but it is actually not processed properly. His hearing of sound such as music is not affected. His communication is significantly improved compared to his first visit assisted by speech therapy which he has attended on a regular basis since the stroke.”

The doctor wrote that he had “spoken with his neurologist and cardiologist and he will follow-up with them routinely.”

“The Lt. Governor takes appropriate medications to optimize his heart condition and prevent future strokes,” Chen said. “He also exercises routinely and can walk 4 to 5 miles regularly without difficulty.

“Overall, Lt. Governor Fetterman is well and shows strong commitment to maintaining good fitness and health practices. He has no work restrictions and can work full duty in public office.”

That, one might assume, would answer well to Fetterman’s health status. Except for one thing: Chen is a big political donor to Fetterman’s campaign and has a vested interest in coloring the candidate as being in good health.

Chen might be right that Fetterman’s health is fine. But the fact that, according to Federal Election Commission documents, he donated $1,300 to Fetterman and another $2,500 to Democrats in Pennsylvania raises uncomfortable questions.

Indeed, the doctor has made continual donations to Fetterman since 2021, when the Democrat announced his candidacy for the U.S. Senate. Chen donated $500 in 2021 and $830 this year, the last of which was $100 in September, FEC records show.

Chen also has a long history of donations to Democratic candidates and political action committees, including $3,000 to Hillary Clinton’s 2016 presidential campaign. He has made contributions to Georgia Senate candidates Jon Ossoff and Raphael Warnock, Florida Senate candidate Val Demmings and House Speaker Nancy Pelosi, as well as left-wing activist groups such as ActBlue.

Yes, it is very possible that Chen’s medical pronouncements about Fetterman are medically sound and not motivated by politics.

But his long history of Democratic activism, coupled with Fetterman’s months of refusing to release any medical reports — only to do so with less than three weeks to Election Day — have left voters with more questions than answers.

It all looks as bad as left-wing CNN bringing in a doctor who has not seen or treated Fetterman to claim that the candidate is perfectly fine. Sure. Nothing fishy about that.

Do you think Oz will defeat Fetterman?

The questions might be ringing loud enough to push Fetterman’s GOP opponent, Dr. Mehmet Oz, over the top in deeply purple Pennsylvania.

The latest InsiderAdvantage/FOX 29 poll finds the two tied even as Fetterman has been leading since day one.

Meanwhile, voters are being expected to believe the report of a Democrat-donating doctor that Fetterman is in perfect health — and to ignore all the warning signs they see every time he walks up to a mic.