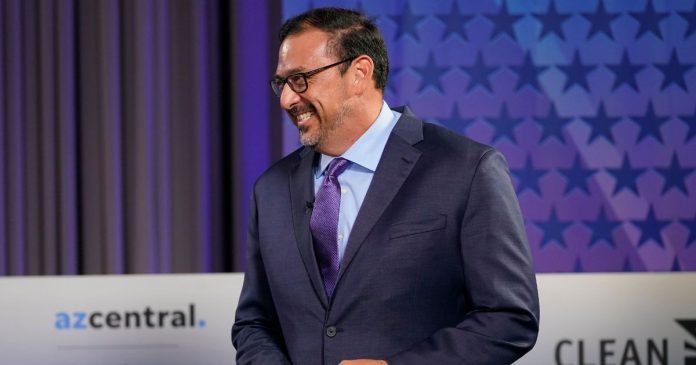 Democrats are desperate to hide from voters that their secretary of state candidate, Adrian Fontes, is nothing but an extremist progressive with a criminal history who has been accused of election fraud and much more.

Nationwide, every state has a top election official — usually the secretary of state.

Realizing the high stakes and importance of the position for future elections, Democrats are turning their sights to three critical battleground states: Arizona, Nevada and Michigan. They are throwing big bucks at deceitful ad campaigns when early voting starts in each state through the Democratic Association of Secretaries of State.

Globalist billionaire George Soros is laser-focused on getting radical liberal Democrats elected as secretaries of state nationwide, just as he has helped finance the campaigns of progressive prosecutors in past elections.

Soros is DASS’ biggest donor and donated $25 million in 2021. The group was worried in February that donors weren’t giving enough.

Back in February, Hailey Fuchs of Politico wrote, “Beyond the $500,000 check written by Soros’ super PAC, Democracy PAC, the biggest donations to DASS came from politically active institutions, not individual donors. The list includes unions — such as Service Employees International Union ($100,000) and the American Federation of Teachers ($50,000) — as well as the Pharmaceutical Research and Manufacturers of America ($100,000).”

Since then, DASS’ war chest has grown exponentially.

In Arizona alone, at least $11 million from DASS and $5 million from iVote and other dark money schemers was spent to help far-left Democrat Adrian Fontes by flooding voters with hard-to-miss false advertisements. They appear all over the internet, on billboards and on TV, proclaiming, “Keep Arizona’s Elections Safe,” “Save the Republic,” “Protect Democracy” and similar messages when nothing could be further from the truth.

As Maricopa County recorder, Fontes oversaw highly contested elections in 2018 and 2020. He’s been caught red-handed breaking laws and causing mysterious “irregularities” that led to mass chaos and accusations of fraud from both sides of the aisle.

In September, Time magazine splashed Fontes on its front cover for a puff piece on Democratic candidates running for secretary of state.

In the article, the very same battleground states and their Democratic candidates were highlighted that DASS is targeting with funds — Michigan Secretary of State Jocelyn Benson, a Democrat who has been accused of breaking state election laws in 2020, and Cisco Aguilar of Nevada, who said, “This is so serious that if I don’t win this election, it could affect the outcome [of the presidential race] in 2024. I could totally f*** up the country, and that’s on me.”

Democratic candidates in other critical secretary of state races in Colorado, Minnesota, Nebraska and Idaho were also mentioned in the article entitled “The Candidates Defending the Results of the Next Election.” But the star of the article was Fontes. Time painted a rosy, idyllic picture of Fontes as a nice, unassuming, patriotic father — when, in reality, that picture is far from the truth.

Fontes is a Bernie Sanders socialist who will do whatever it takes to win.

Until Fontes became Maricopa County recorder in 2016 with Soros’ help, Arizona was reliably a red state. Since then, Democrats have been focused on turning it and other states blue.

Democrats are concentrating on 2022 because the winner will oversee statewide elections in 2024 and ensure they win the big prize — the presidency.

Mary Beth Brown is a New York Times best-selling author of “The Faith of Ronald Reagan.” She sits on the board of Liftable Media Inc., the parent company of The Western Journal.

Mary Beth Brown is a New York Times best-selling author of “The Faith of Ronald Reagan.” She sits on the board of Liftable Media Inc., the parent company of The Western Journal.