Dems Think They've 'Caught' GOP Rep in Undercover Video, But It Only Backfires: 'How Is This a Bad Thing?' 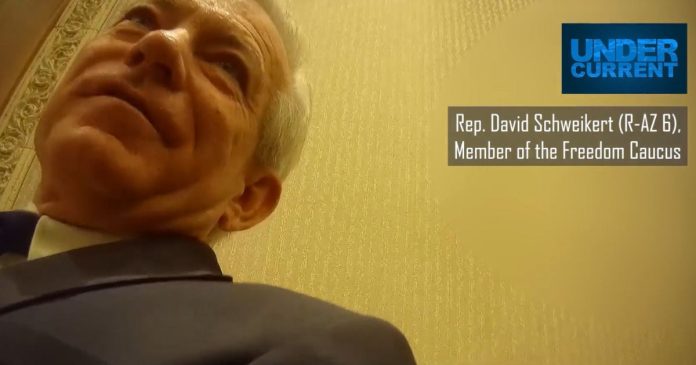 So thought Democratic activists who were sure they snared Republican Rep. David Schweikert of Arizona in a campaign-damaging controversy as he said things while being recorded undercover in a Project Veritas-type sting.

The recording, in which Schweikert said the FBI should be broken up and Biden administration officials should be impeached, was shared on social media by interviewer Lauren Windsor — a wannabe James O’Keefe — and other activists on Monday.

“This is the best GOP campaign ad I’ve ever seen and you put it out as a hit piece,” one Twitter user said.

Whoops. Somehow an image arises of a coyote who, after falling into a deep canyon, is hit on the head with an anvil.

Here was the scheme by Windsor, who has been involved in legal action against Project Veritas and who organized the ridiculous tiki torch stunt against Virginia Gov. Glenn Youngkin last year:

She approached Schweikert at what appears to be a political gathering — she said it was shot Saturday in Scottsdale — in hopes of getting him to say something politically damaging.

“They don’t want us to really talk,” she said, apparently straining to speak quietly while competing with an amplified voice in the room. “But I did want to ask you one question.

“So my husband … was up at the Capitol on Jan. 6 and, you know, all these things they’re doing to these freedom fighters that are in the jail in D.C. — I think it’s terrible, and I’m just hoping that you guys are going to fight for them to get pardons.”

Schweikert, holding an infant, responded: “We need to win the White House.”

Windsor said: “And so that can happen, that we can …”

“Gotcha,” she said. “Thank you so much for everything you’re doing.”

Schweikert elaborated: “The No. 1 thing we can do there is — and this is actually why you want [Republican Rep.] Jim Jordan [of Ohio] on [the House] Oversight [Committee] – is every one of those documents from the FBI goes to his committee.”

“Are you going to hold them accountable?” Windsor asked.

“We can expose it to the public, what’s really going on,” Schweikert said.

This was followed by another question from Windsor: “Are you going to defund the FBI?”

“But you can defund the witch hunts, the investigations?” she said.

“Exactly,” the congressman answered. “You defund the line items [on their budgets], you strip where they spend their money.”

Windsor: “Can you impeach [FBI Director] Chris Wray? Can you get him gone?”

Schweikert: “Sure, sure, sure.”

“I have a couple of other ones I want to, I’d impeach first,” he said.

“Yes. For sure,” Windsor said.

“So Mayorkas, and then who?” she asked.

“The secretary of state [Anthony Blinken] … Because if you see what they’re doing with this government, he has worked to open up communist-socialist governments around the world … and taking away American values around the world. So that’ll be tough is we’ll never get two-thirds votes in the Senate, but it only takes a simple majority in the House to start the process.”

Windsor: “Great. Well, thanks so much for taking the time. You’re doing the Lord’s work, you really are.”

She posted the video on her Undercurrent YouTube channel and on Twitter, writing, “NEW: GOP Rep. Dave Schweikert told me, ‘You don’t want to defund [the FBI], you want to break them up.’ Schweikert also lists his top 3 impeachment targets for a GOP-controlled House: Sec. Mayorkas, Sec. Blinken, FBI Director Chris Wray.”

NEW: GOP Rep. Dave Schweikert told me, “You don’t want to defund [the FBI], you want to break them up.”

Scott Dworkin, executive director and co-founder of the Democratic Coalition, also shared the interview on Twitter, saying, “GOP Rep. Dave Schweikert was caught on undercover video talking about breaking up the FBI and impeaching members of the Biden Administration if GOP wins House. Let’s make this viral.”

GOP Rep. Dave Schweikert was caught on undercover video talking about breaking up the FBI and impeaching members of the Biden Administration if GOP wins House. Let’s make this viral.

They probably didn’t expect the responses, many of which praised the congressman’s comments.

How is this a bad thing?

Didn’t realize how great Schweikert was until now!

Are you trying to elect Republicans? If so, you’re doing a great job.

Why do you need undercover video? I’m sure he would say this on the record.

You sure you want this to go viral?

OK, you asked for it. Will do. #DisbandTheFBI

So he wants to do what MUST be done to save us from corrupt bureaucrats/activists?

I agree with everything he said!!!!! Get those documents into the public and break up the FBI, they are TOO political!

As countless anvils continue to drop on the hapless Democratic coyote, there are some thoughts for Republicans.

Should Republicans be saying publicly what Schweikert said privately?

Tell the world what needs to be said: Crime and inflation are out of control, the border is a mess, gas prices have been deliberately manipulated, schools are plagued with critical race theory and gender oppression, nuclear war is threatened, medical institutions are corrupt along with other institutions related to education, business and media, and we have people in or running for office who are embarrassments to our nation.

Place all those problems and more at the feet of those directly responsible: the Democratic Party.

Schweikert addressed some of the problems in what he thought was a private conversation. See the aftermath?

All Republicans worthy of the name need to be shouting these things from the housetops.

And keep those anvils coming.