Officer Begs School to Keep Armed Men Out, But Assistant Principal Told Gunmen to Enter and Stay Safe from Police 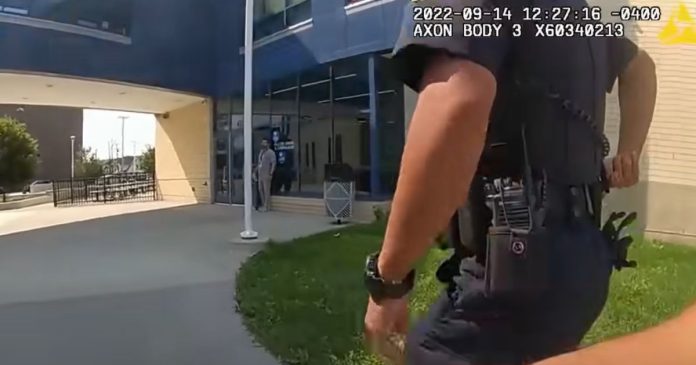 October 18, 2022
Reading time: 4 min.
Facebook
Twitter
Pinterest
WhatsApp
The nation’s largest police union blasted the “woke” assistant principals of an Ohio high school for allowing four masked gunmen to enter because they were more concerned that the police would apprehend the suspects than they were about the safety of the students hiding inside from the intruders.

In a scathing tweet Wednesday, the National Fraternal Order of Police savaged school administrators who unlocked the doors and let the gun-toting criminals inside Cleveland’s Garrett Morgan High School on Sept. 14 after the school went into lockdown.

The FOP — which represents more than 364,000 police officers nationwide — tweeted that the “reckless and dangerous” administrators “allowed MASKED GUNMEN to enter the school in order to protect the gunmen from *wait for it* police officers outside.”

The union underscored: “They risked the lives of CHILDREN to show how woke they are. Can’t make it up.”

‼️⚠️ RECKLESS + DANGEROUS ⚠️‼️@CLEMetroSchools administrators at Garrett Morgan HS allowed MASKED GUNMEN to enter the school in order to protect the gunmen from *wait for it* police officers outside.

They risked the lives of CHILDREN to show how woke they are. Can’t make it up pic.twitter.com/NyQAtcAj6r

Police later chased down and arrested the gunmen, and no one was hurt.

However, the incident spotlights how the insidious left-wing demonization of police has infiltrated the mindset of teachers today.

Records reviewed by WJW-TV in Cleveland confirmed that school administrators had allowed the armed intruders into the building.

Was the school official right to unlock these doors?

“Two assistant principals from leadership let the males into the building,” one witness statement said.

One of the vice principals affirmed the witness’ account: “I confirmed the interior doors were locked and instructed the four suspects to come to the vestibule because it was unsafe to be outside because I saw police officers.”

In so doing, the vice principal defied the advice of the police dispatcher, who told the school’s security officer to “keep the school locked down.”

For his part, the security officer is repeatedly heard on the 911 call yelling to others: “Do not let anybody through that door!” and “Do not let them in the building, people!”

The chilling incident unfolded last month when armed assailants drove up to Garrett Morgan High School in three stolen cars, according to WJW. The school then went into lockdown.

The intruders were able to pass through one door after it was unlocked for them, but a second door prevented them from escaping into the building.

Authorities later learned that one of the suspects had an arrest warrant out for him from a prior robbery case.

The shockingly tone-deaf Cleveland Metropolitan School District issued this statement: “The staff member made a split-second decision that the individual thought was the best way to keep students and staff safe. “

Yup. If this is true, he needs to be fired, pension removed and criminally charged.

He should be charged as an accomplice.

They failed the students and should be unemployed

The administrators should be arrested for reckless endangerment. 1 count for every kid in that school. https://t.co/fCDU16fVWq

Imagine if you were a parent of a student who could’ve been killed by armed intruders who were blithely ushered inside by a “woke” school official.

From critical race theory to drag queen story hours to the lionization of transgenderism, America’s public schools have devolved into toxic cesspools of leftist indoctrination.

It’s one thing to poison children’s minds with twisted ideologies. It’s another to frivolously endanger their lives. Stop this madness.