ICYMI: Republican Booted from Town Hall Audience Before Opponent Who Refuses to Debate Took the Stage 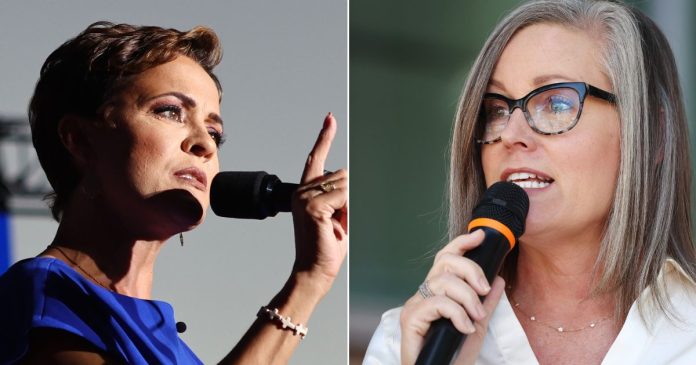 October 17, 2022
Reading time: 6 min.
Facebook
Twitter
Pinterest
WhatsApp
With midterm elections only three weeks away, few states are shaping up to be as critically important to both parties as Arizona, where the governor’s race will decide whether Republicans continue to control the executive mansion in a battleground state that helped hand the 2020 election to President Joe Biden.

Throughout the campaign, Hobbs has repeatedly refused to debate Lake, a position that has roiled the Grand Canyon State’s politics. It  became a top political story last week when the Arizona Citizens Clean Elections Commission clashed publicly Wednesday with Arizona State University’s PBS over the public broadcasting service’s decision to give the candidates 30-minute interviews separately rather than a debate, as KOLD in Tucson reported.

In a Twitter post, the commission, which runs debates in the state, canceled its interview with Lake that was supposed to air on PBS.

Hobbs reiterated her refusal to debate as recently as Friday, during an interview with Phoenix station KTVK-TV. She claimed Lake is “only interested in creating a spectacle.”

Well, if “creating a spectacle” is what Hobbs is worried about, she didn’t show it earlier this month when she and her staff had Lake booted  from an audience before Hobbs spoke at a town hall event where the two women were to showcase their campaigns.

The incident. which deserved more media attention than it got, took place Oct. 3 at a town hall moderated by Univision News anchor Leon Krauze, according to NBC News.

Would you vote for someone who refuses to debate an opponent?

Organizers of the event told NBC that, according to the agreed-upon rules, Hobbs and Lake were not allowed to appear on stage at the same time. Additionally, while one candidate was recording her segment, the other was supposed to remain in a holding room.

When Hobbs took the stage, she was apparently horrified to see Lake seated in the front row, which NBC reported was “in the direct line of sight of where her opponent would sit.”

According to NBC, “Lake protested, saying she was unaware of that rule and said Hobbs should come out and debate her. Hobbs didn’t. After several minutes, Lake complied, leaving behind her campaign surrogate, Mexican telenovela star Eduardo Verástegui.”

Joe Garcia, the executive director of voter outreach for the Chicanos Por La Causa Action Fund, a co-sponsor of the event, told NBC, “Kari Lake brought along a Mexican telenovela star and she brought the drama. It was like a telenovela.”

“She [Lake] rattled her opponent. She was big, brash, and very larger than life, Trump-esque,” Garcia said. “Anyone who thinks she was there to follow all the rules doesn’t know Kari Lake.”

One member of the audience told NBC this race was a clash between “an NPR Democrat and a Trump Republican.”

Well, it might be that. But at bottom, it’s a campaign for political office in the United States of America, where there’s a long history of candidates debating in public before voters go to the polls.

Lake reacted to the incident on Twitter, declaring, rightly, that Arizonans deserve a debate.

This is really sad. The people of Arizona deserve better than this.

They deserve a debate.

I have given @katiehobbs every opportunity to prove that she’s better than me. But she can’t.

So instead of running for Governor, she just runs away.https://t.co/sgO5ectVsz

“If a candidate can’t even face their opponent, they have no business trying to run a state, much less a relatively large state dealing with a major crisis. Is @katiehobbs going to hide in her room every time the going gets tough as Governor of Arizona?”https://t.co/oY6nJm8fCF

.@bgmasters: She’s (@KatieHobbs) a coward for not debating @KariLake…. it’s also somewhat rational for Katie Hobbs not to debate Kari Lake. Because if you think there was a spectacle last Thursday when I put @Senmarkkelly on the ropes, imagine what Kari Lake would do to Katie-” pic.twitter.com/ea4xwAVrBx

Hobbs’ almost obsessive determination to avoid a debate with Lake might explain why she’s been losing ground in the polls. Over the summer, Hobbs ran slightly ahead of Lake. Currently, Lake has pulled slightly ahead of Hobbs. As of Thursday morning, the RealClearPolitics average of polls shows Lake up 0.7 points over her opponent. RCP projects Lake as the likely winner.

Candidate debates have been an essential part of the democratic process forever. A debate is essentially a job interview. Voters have every right to see how aspiring leaders react to hard questions and how they conduct themselves under pressure.

No intelligent business owner would make an important hiring decision without interviewing a candidate first. Likewise, no voters should cast their ballots until they’ve completed their due diligence.

If Hobbs refuses to come in for the interview, she shouldn’t be hired. Period.