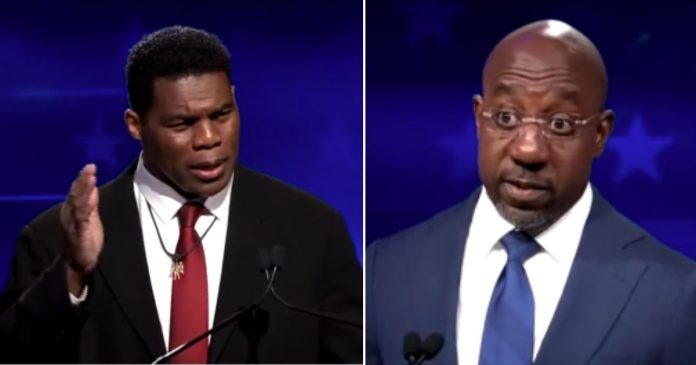 Walker, trying to recover from a series of damaging headlines, needed a solid performance, and he delivered one.

Two of Walker’s strongest moments came during an exchange about abortion. Warnock, who is a Christian pastor, advocates for no limits on abortion. Walker is pro-life.

Warnock replied, “I think the women of Georgia have a clear choice.”

Sen. Raphael Warnock (D): “I think the women of Georgia have a clear choice.” pic.twitter.com/Ry6CaAilRB

“A patient’s room is too narrow and small and cramped a space for a woman, her doctor and the United States government. We are witnessing right now what happens when politicians, most of them men, pile into patient’s rooms,” Warnock said. “The women of Georgia [deserve] a senator who will stand with them. I trust women more than I trust politicians.”

Then Walker landed one right between the eyes. He said, “He’s a neat talker, but did he not mention that there’s a baby in that room as well?”

Warnock: “A patient’s room is too … cramped a space for a woman, her doctor, and the US government.”

Walker: “There’s a baby in that room as well.” pic.twitter.com/l5NJO9z7G5

The Trump-endorsed Walker got hammered in the polls this summer when revelations of his illegitimate children and history of mental health problems surfaced, but he rebounded strongly over the month of September and managed to close the gap between him and Warnock completely. In fact, the Real Clear Politics average of polls in this race showed Walker up 0.5 points.

In early October, however, the Daily Beast published several articles alleging that in 2009, Walker paid for his then-girlfriend to get an abortion, and that two years later he recommended she get a second one. Walker has vehemently denied these allegations, and did so again during the debate.

There’s no question the articles hurt his chances in the race. As of Saturday, the RCP average of polls showed Warnock with a 3.3-point lead.

On Friday night, Walker tried to tie Warnock to President Joe Biden’s failed agenda, noting that he had voted with Biden 96 percent of the time.

WALKER: “Warnock said he stood up. He has NOT stood up to Biden.”

“If he was standing up, he wouldn’t have voted with him 96% of the time, which gave us” an open border, high inflation, and crime in the streets. #GASenDebate pic.twitter.com/Yr18nlTw8H

Warnock was asked if he thought Biden should run for re-election in 2024. Like many other Democratic candidates this election cycle, the senator dodged the question. He said, “I’ve not spent a minute thinking about what politicians should run in 2024.”

Warnock ducks when asked if he would support Biden run in 2024:

The moderator asked Walker if he would support former President Donald Trump in 2024. The Republican answered, “Yes, I would. … President Trump is my friend. … I won’t leave my allies, which is what Sen. Warnock and Joe Biden did in Afghanistan.”

Herschel Walker: “Yes I would. President Trump is my friend I won’t leave my allies, which is what Senator Warnock and Joe Biden did in Afghanistan.” pic.twitter.com/87cSx3tiqI

The Washington Free Beacon reported this week that Warnock still draws a salary and receives a monthly housing allowance of $7,417 from Ebenezer Baptist Church.

The church owns 99 percent of the Columbia Tower at MLK Village in downtown Atlanta, according to the report. The Free Beacon obtained documents that “describe the building as a home for the ‘chronically homeless’ and those with ‘mental disabilities.’”

During the pandemic, “Ebenezer Baptist Church’s business partner, Columbia Residential, the 1 percent owner of the building, which manages its day-to-day operations,” filed 12 eviction lawsuits against tenants who were late in paying their rent.

“The total sum of past-due rent cited in the lawsuits is just $4,900, a figure that could have been covered by one of Warnock’s monthly housing stipends from the church.”

Do you think Walker will win in November?

The Free Beacon learned that because of its status as a charitable organization, Columbia Tower has paid just $77.77 in property taxes over a seven-year period and “has received more than $15 million in taxpayer-funded assistance since 2005.”

Walker hit Warnock over the evictions in the exchange below.

Walker: “He won’t answer that about evicting the people from the church..”

Warnock: “We have not evicted those tenets.”

Walker: “He’s now telling you ‘I didn’t evict anyone.’ It is written in the paper!..Senator, you did! It’s okay to speak the truth. Do not bear false witness! pic.twitter.com/YxBzjr8XeX

All in all, Walker far surpassed expectations. The former Heisman Trophy winner’s performance put him back in the game.