Jan. 6 Committee Think They've Got Trump Backed Into a Corner, But His Testimony Could Destroy Them: Report 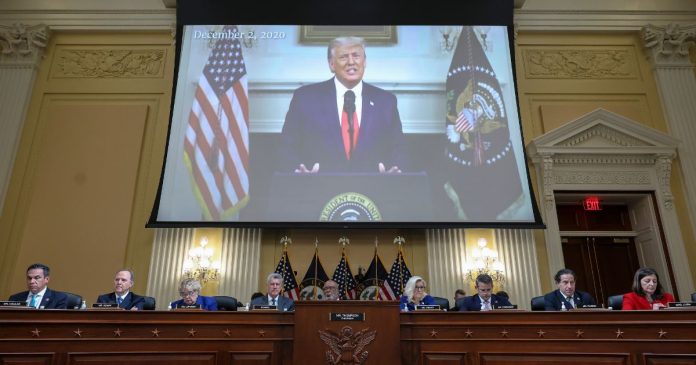 October 15, 2022
Reading time: 5 min.
Facebook
Twitter
Pinterest
WhatsApp
On Thursday, members of the House select committee investigating Jan. 6 unanimously voted to subpoena former President Donald Trump to testify about events leading up to and on the day of the Capitol incursion.

A source close to Trump told Fox News Digital that the former president “loves the idea of testifying.”

The source said if Trump actually does appear before the committee, he will “talk about how corrupt the election was, how corrupt the committee was, and how [House Speaker] Nancy Pelosi did not call up the National Guard that Trump strongly recommended for her to do three days earlier on January 3, 2021.”

The source added that it is “unclear” if Trump plans to comply with the subpoena.

In a Thursday interview with Fox, Trump said, “The committee is a hoax, a sham, a partisan witch hunt which is a continuation of the witch hunt that has gone on since the great day for our country that I came down the golden escalator with our future first lady. … They have no case, they have no ratings, so they have to try to do this to get publicity.”

Referring to Republican Reps. Liz Cheney of Wyoming, who lost her primary in August, and Adam Kinzinger of Illinois, who is not seeking re-election, Trump said the probe has been a “partisan witch hunt, together with two Republicans that have been thrown out of the party — one not wanting to run because he couldn’t win, and another losing by a record number of more than 40 points.”

Trump noted that the committee “never covered the important subject of election fraud, or why Pelosi and the mayor of D.C. did not call up the National Guard — which I strongly recommended.”

“They didn’t do their job. I believed the crowd was going to be bigger — just my instinct — and they had the chance to call up the National Guard three days before Jan. 6, and if they did, Jan. 6 would have been a very different day,” he explained. “But they didn’t do it. … They were derelict in their duty. I gave them the authorization and the recommendation to call up the National Guard.”

Trump spokesman Taylor Budowich reacted to news of the subpoena in a Twitter thread.

Today, 26 days before the Midterm Elections, America is truly a nation in decline. Inflation is out of control, the crime rate is at an all time high, and the crisis at our southern border has never been worse. 1/3

However, instead of using their final days in power to make life for Americans any better, Democrats are doubling and tripling down on their partisan theatrics. Democrats have no solutions and they have no interest in leading our great nation. 2/3

They are simply bitter, power hungry & desperate. Pres Trump will not be intimidate by their meritless rhetoric or un-American actions. Trump-endorsed candidates will sweep the Midterms, and America First leadership & solutions will be restored. MAKE AMERICA GREAT AGAIN! 3/3

Thursday’s hearing was no different than the previous nine. The seven Democrats and two anti-Trump Republicans, speaking in the gravest tones, leveled the same baseless accusations against Trump as they always do.

They should hope he doesn’t call their bluff and testify. Because it will leave many Democrats and liberal bureaucrats flat-footed and scrambling for alibis themselves.

If Republicans win control of the House next month as anticipated, it’s doubtful the current Jan. 6 committee will continue. It is highly likely that a new committee will be established to investigate the roles of other key players such as Pelosi and Washington, D.C., Mayor Muriel Bowser, who declined Trump’s offer of National Guard protection.

Should Trump testify before the Jan. 6 committee?

The activities and conduct of the Capitol Police and the FBI and their use of confidential sources will also be examined. Even the Justice Department’s handling of its investigation will be subject to oversight.

The hypocrisy and dishonesty of the committee members and their liberal supporters always reminds me of the well-known story from the Gospel of John about the adulteress brought before Jesus by a group of scribes and Pharisees.

They say, “In the Law, Moses commanded us to stone such women. So what do you say?” Jesus replied, “Let him who is without sin among you be the first to throw a stone at her.”

If Republicans take back the House, this story might end a little differently. Instead of the scribes and Pharisees skulking off in shame, they may instead find themselves detained by an army of investigators.

The hunters may soon become the hunted.