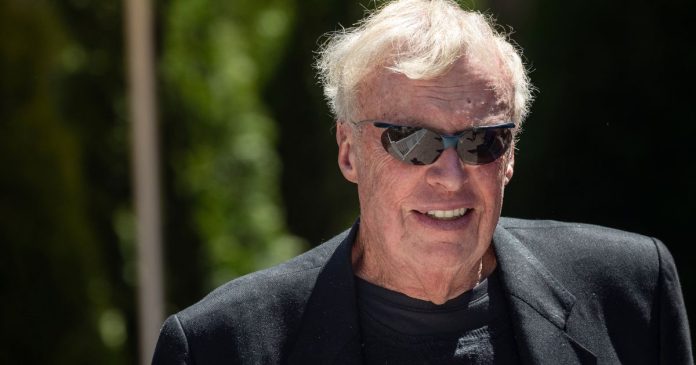 October 12, 2022
Reading time: 5 min.
Facebook
Twitter
Pinterest
WhatsApp
With only a month to go until Election Day, billionaire entrepreneur Phil Knight, co-founder of sportswear giant Nike, has shocked everyone by donating $1 million to Christine Drazan, the Republican running for governor of Oregon.The million-dollar donation to the Republican comes after Knight’s previous donation of $3.75 million to former Democratic Oregon Rep. Betsy Johnson, who jumped in as an independent to run against Dem. candidate Tina Kotek and Republican Drazan, according to KGW.

Knight and his wife Penny have been spreading donations around Oregon for years. Last year, for instance, the pair donated a staggering $500 million to the University of Oregon.

As to the governor’s race, polls in Oregon have Drazan and Kotek neck-and-neck with Johnson in a distant third place.

KGW reported that Knight, who is reportedly worth $40 billion, is more delivering a “no” to Kotek rather than saying “yes” to either Johnson or Drazan.

Analysts add that the 84-year-old Nike founder is looking specifically to douse Kotek’s chances. KGW political analyst Len Bergstein said that with Johnson’s independent bid for the office running aground, it appears that Knight is now funneling money to the Republican just to stop Kotek.

A poll reported by Oregon Public Broadcasting found that Oregon voters are an unhappy bunch under current Democratic Gov. Kate Brown. The poll found that more than 70 percent of respondents said that Oregon is on the “wrong track.”

Oregon has other troubles, too. According to KOIN, the Beaver State is the second-worst state in the country for substance abuse and addiction. Even worse, it is at rock bottom in access to treatment.

Will a Republican win the Oregon gubernatorial race?

Oregon also had some of the strictest COVID policies in the country and only removed its mask mandate on March 31, making it among the last states to do so, KGW added.

Nike, of course, was right in line with Oregon’s strict COVID policies and in 2020 even closed all its stores nationwide over the coronavirus.

The donation will not likely sit well with Knight’s left-wing fans. And it may not even make his company very happy.

Nike is one of the most identifiably left-wing corporations in the U.S., so left-wing that it couldn’t even see its way clear to release the Betsy Ross flag shoe it had planned because its partner American anthem protester Colin Kaepernick illogically equated the Betsy Ross flag with slavery.

On the other hand, while the company couldn’t bring itself to honor American history, it did put out a shoe commemorating the day Kaepernick took a knee during the national anthem.

Despite the company’s commitment to “social justice” and the poor and oppressed, though, Nike has also been mysteriously silent in the face of China’s genocide against its minority Uyghur population as well as its long, long list of other human rights abuses.

Indeed, Nike isn’t just remaining mum on China’s abuses, current company CEO John Donahoe has admitted that at the same time they stay quiet on China’s crimes, the red giant is “a very important market for us.” Follow the money.

Meanwhile, the communist regime has been excoriated for perpetrating abuses against its Uyghur people in the Xinjiang autonomous region, allegedly persecuting the Muslim minority with forced sterilization and slave labor.

Granted Knight is no longer running Nike — having stepped down in 2016 — his company has been reliably left-wing for decades.

However, for this champion of the left to realize that the Democrats need to be kept out of power like his political donations this year show, that says volumes about just how bad the Democrats have messed up this country.