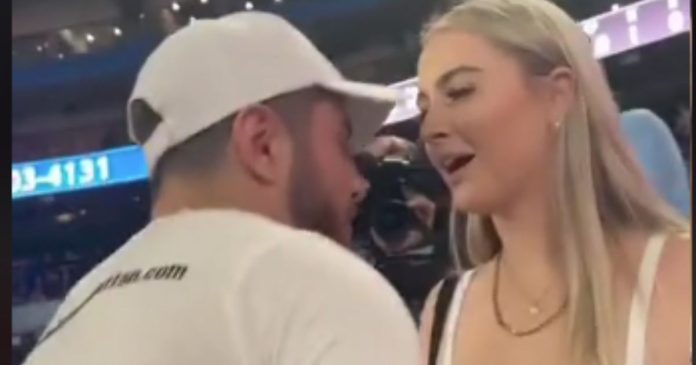 October 10, 2022
Reading time: 3 min.
Facebook
Twitter
Pinterest
WhatsApp
A public proposal at a Toronto Blue Jays game went wrong when a chivalric suitor brought out a Ring Pop when the time came to pop the question.

A fan in attendance filmed what first looked like a wholesome proposal over the weekend, according to the New York Post.

A woman appears speechless after kissing her partner, who kneels in a manner suggesting he’s asking for her hand in marriage.

What initially looked like a romantic moment, however, quickly went sour.

The woman’s expression quickly changed when she realized her man was offering a Ring Pop candy, instead of something resembling a real engagement ring.

She answered his “proposal” by slapping his face and dousing the man with her drink before walking off.

Have you ever seen a proposal at a professional sporting event?

The video appeared on a Canadian TikTok account, quickly going viral. It’s not clear where the “canadianpartylife” TikTok sourced the video from.

Some viewers of the video blamed the man for humiliating his partner in front of a crowd of thousands of people.

Others criticized the girlfriend’s violent reaction.

In this instance you still say yes if you truly love the person. You go along with the joke and then have a conversation about it after if he doesn’t pull out a real ring.

He needs to run away and find a new girl with a real sense of humor.

If you’re going to ask someone to marry you in the presence of tens of thousands of people, common sense necessitates confidence that your proposal will be accepted.

It’s not entirely clear if this entire incident is real. If the goal behind the video was to obtain virality on TikTok, it succeeded — more than 200,000 people viewed the video in 48 hours, according to the New York Post.

It’s possible the entire video was a stunt staged for social media clout and followers.

However, if this man was dead serious in his joke of a proposal, he probably shouldn’t be surprised to find himself in the metaphorical doghouse.