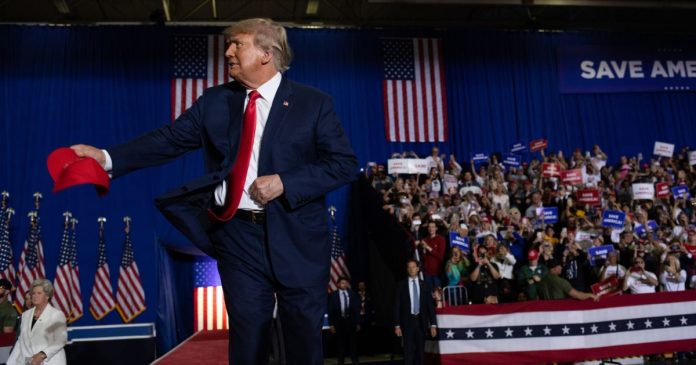 October 4, 2022
Reading time: 5 min.
Facebook
Twitter
Pinterest
WhatsApp
As former President Donald Trump left the podium after his Saturday night rally in Warren, Michigan, a supporter tossed him a MAGA hat, and then a pen. Trump caught both items with great ease, coolly autographed the hat, and tossed it back along with the pen.

His agility was quite impressive, especially after holding a nearly two-hour rally. It didn’t take long for comparisons between Trump, 76, and the dotard who currently occupies the White House to go viral on social media.

#TrumpRallyMichigan ends with amazing demonstration of Trump’s agility vs Biden’s.

Wait for it – Trump catches a #MAGA hat then THIN PEN out of air; signs the hat, and throws both back to owner! pic.twitter.com/kFkqFWq7pY

Another wrote, “Trump just may be Superman & Batman, rolled into one.”

Trump just may be Superman & Batman, rolled into one.

At the #TrumpRally, a fan threw a MAGA hat & pen at 76 year old President Trump — and he caught both. (Actually, he snatched that pen from mid-air).

Compare that to Biden, who d/n know how to exit & calls out to dead ppl. pic.twitter.com/jV4dmZYFJ5

The moment was especially notable coming on the heels of a string of humiliating blunders committed by President Joe Biden in recent days.

You may recall that during remarks at the White House Conference on Hunger, Nutrition and Health last week, he asked if Republican Rep. Jackie Walorski of Indiana, was in the audience. Walorski was killed in a car accident on Aug. 3.

White House press secretary Karine Jean-Pierre insisted during her press briefing that Walorski “was clearly on top of his mind.” But the moment could not be so easily dismissed.

Reporter: “What happened when Biden said where is Jackie Walorski?”

Jean-Pierre: “The president was acknowledging her incredible work.”

Reporter: “He said ‘Jackie, Jackie, where is Jackie?’”

Jean-Pierre: “She was clearly on top of his mind.” pic.twitter.com/y1TljVg1BW

One week earlier, following remarks at the Global Fund’s Seventh Replenishment Conference in New York City, Biden appeared dazed and confused as he left the podium. As the crowd was applauding his speech, Biden shuffled zombielike away from the podium.

He stopped, looking for direction from one of his handlers, appeared to catch the eye of a staffer and pointed down. He paused once again, then looked quickly back at the stage where a speaker was thanking him for his address. He literally did not know what to do with himself.

Where ya going, Big Guy? pic.twitter.com/hvMjZlprWb

The list of Biden gaffes is endless. He needs his wife to tell him what he should do and where he should go.

NOW – Jill to Joe Biden: “You go down this way.”pic.twitter.com/oOlys2oLW4

Biden’s decline in the two years since the October 2020 presidential debate is marked. In the clip below, he answered the first question. While he lacks the vigor of Trump, he responded without the use of a teleprompter.

He spoke clearly. We don’t hear the slurring and the stumbling that dominate his speech today. The difference is stark.

While it may seem cruel to repeatedly point out the President’s cognitive decline, it is not fair for Americans to be led by a senile man. In fact, it is dangerous.

We’ve watched his decline over the past two years knowing that he’ll be even worse in another two years. Yet he talks about a second term as if it’s a live option.

Before catching the hat and the pen, Trump told his supporters, “We are a nation in decline. We are a failing nation.”

THE CLOSER: President Trump on America’s decline under Biden, yet the best days are still to come.#TrumpRally pic.twitter.com/XqdhZPGMeb

He took the crowd through a timeline of the current administration’s failures and the consequences for America.