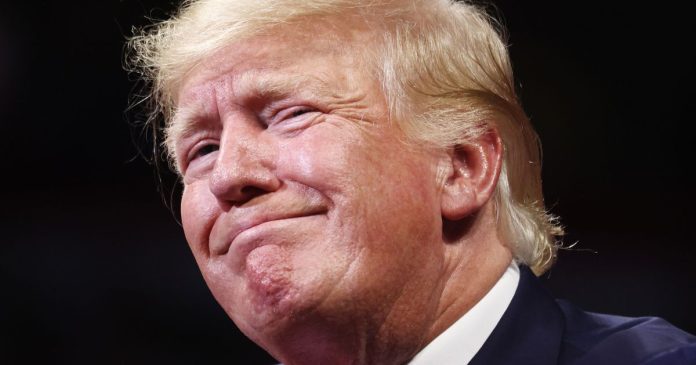 October 4, 2022
Reading time: 4 min.
Facebook
Twitter
Pinterest
WhatsApp
Former President Donald Trump got a favorable ruling from federal judges in a defamation lawsuit filed by a woman who claimed Trump raped her in the 1990s.

A three-judge panel of the 2nd U.S. Circuit Court of Appeals in New York ruled on Tuesday that E. Jean Carroll could not sue Trump personally for any defamatory statements he made about her when he was president, The Hill reported.

Her original accusation came in a book excerpt six months earlier. Carroll claimed in June 2019 the real estate mogul raped her in a dressing room at the Bergdorf Goodman store in Manhattan around 1995 or the beginning of 1996 after she agreed to model lingerie for him.

When these accusations came to light, Trump strongly denied them and said she was “totally lying.”

Two days after Trump’s remarks, he spoke of her claims again in an interview with The Hill.

Carroll filed her lawsuit against Trump on Nov. 4, 2019, claiming his “false and defamatory statements” caused her to “suffer reputational, emotional, and professional harm.”

The 2nd Circuit Court panel ruled Tuesday that a lower court erred when it determined Carroll could sue Trump personally.

“When an employee of the federal government is sued for tortious conduct that happens on the job, the employee is generally entitled to absolute immunity from personal liability under the Federal Employees Liability Reform and Tort Compensation Act of 1988 (the ‘Westfall Act’),” Judge Guido Calabresi wrote.

Calabresi made it clear the ruling was not addressing the veracity of Carroll’s claims or whether Trump’s statements were defamatory.

It was simply a ruling on the issue of Trump’s “employment” in the government and the immunity connected to that status.

“In certifying, we wish to emphasize that the issue before us is totally separate from the substantive merits of the claim underlying this defamation action,” Calabresi wrote.

“That is, in evaluating the scope of employment issue, we do not pass judgment or express any view as to whether Trump’s public statements were indeed defamatory or whether the sexual assault allegations had, in fact, occurred. Those questions, which might loom large over this case at some point, are simply not before us in the present appeal,” the judge added.

The panel’s decision was not unanimous. While Calabresi and Judge William J. Nardini were in agreement, it was a 2-1 decision with Judge Denny Chin dissenting.

Chin wrote in his dissenting opinion that “Carroll’s allegations plausibly paint a picture of a man pursuing a personal vendetta against an accuser” and she was entitled to pursue “at least some” claims, Reuters reported.

“We are extremely pleased with the Second Circuit’s decision today in reversing and vacating the District Court’s finding in this matter,” Habba said, according to The Hill. “This decision will protect the ability of all future Presidents to effectively govern without hindrance.”

Meanwhile, Roberta Kaplan, one of Carroll’s lawyers, said in a statement she was “confident” that the D.C. court would let the case proceed, Reuters reported.