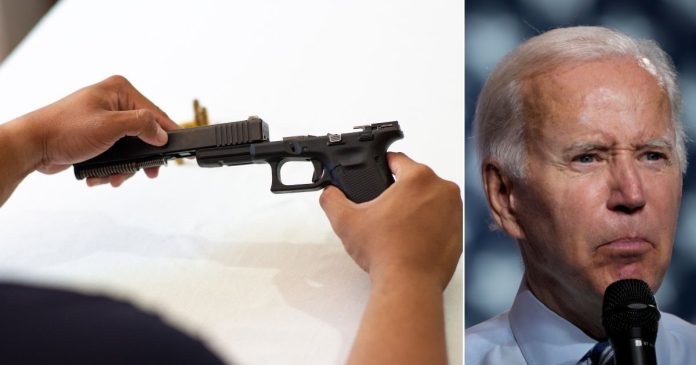 However, a recent report from The Federalist has shown that, due to changes made in retailers’ inventory, Biden’s ban on firearms lasted less than a minute.

Biden’s new federal regulation, which went into effect on Aug. 24, prohibited the sale of kits that contain everything the end user would need to construct a functioning gun from being sold without a background check.

President Joe Biden unveiled a new rule to rein in so-called ghost guns and ban the manufacturing of the untraceable firearms as the administration faces growing pressure to crack down on gun deaths and violent crime in the United States https://t.co/MV9zikCynp pic.twitter.com/070ahsvcRM

And the executive action was hailed by Gun Control advocates.

However, the celebrations may have been a bit premature from the Second Amendment opposition groups. As Max McGuire wrote for The Federalist, “As soon as the clock struck midnight and Biden’s new rule went into effect, retailers had already adjusted their inventory to comply with the new regulations. Biden’s ban on ‘ghost guns’ lasted no longer than a minute.”

Do you think that there should be a ban on ‘ghost’ guns?

The ban, in effect, added to the existing regulations new language that if a retailer sold the necessary, though unfinished, components to construct a gun together, then these kits “may be readily converted” to fire projectiles and would therefore legally constitute a “firearm.”

McGuire noted, “the stack of boxes from four separate orders would not legally count as a firearm.”

Naturally, that’s precisely what retailers did: They required separate orders, or refused to sell all four items to the same customer, thus requiring a purchaser to use multiple vendors so that no single retailer ever actually sold a “firearm.”

It took less than 60 seconds, according to the report from Federalist. By 12:01 a.m. on Aug. 24, Biden’s regulatory change, accomplished with the stroke of a pen, had been rendered moot with the click of a mouse.

The only thing that the Biden administration has succeeded at with this move is to make it marginally less convenient and more expensive to purchase and construct a so-called “ghost gun.”

McGuire said, “This regulation was never aimed at the criminal class, though. Like all gun control, it targets the law-abiding. Politicians and bureaucrats fear homemade firearms because they exist outside of regulated firearm commerce.”

He continued, “There is no serial number or background check, so the federal government does not know who owns them. In a dystopian future where government agents could be dispatched to seize Americans’ known or registered firearms, the homemade guns would remain.”

The momentary interplay between the regulation and the gun industry on Aug. 24 suggests that the metaphorical “arms race” between regulators acting on Democrat politics to clamp down on gun manufacturers and gun-owners rights and the industry’s ingenuity is likely to continue.