Even the FBI is Admitting to Disturbing Internal Patterns – Should We Have Any Trust Left for Them? 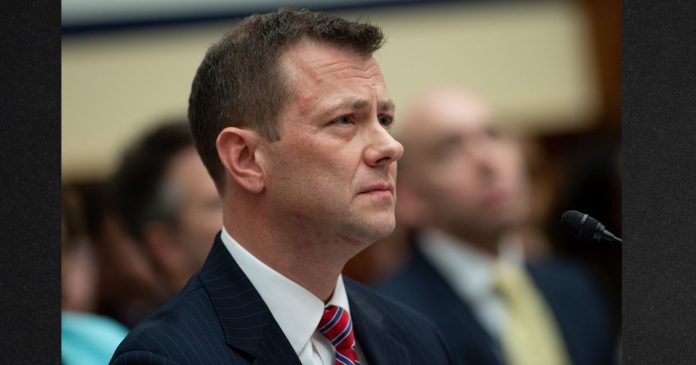 October 4, 2022
Reading time: 4 min.
Facebook
Twitter
Pinterest
WhatsApp
Few inside the FBI have disgraced both the agency and themself quite as thoroughly as special agent Peter Strzok. He was fired from his position as the Deputy Assistant Director of the FBI’s Counterintelligence Division after text message exchanges with his paramour and colleague, FBI lawyer Lisa Page, were revealed.

Strzok led both the Hillary Clinton e-mail investigation and the early stages of the FBI’s bogus investigation into then-presidential candidate Donald Trump’s alleged collusion with the Kremlin to win the 2016 election. Strzok’s fanatical quest to derail first Trump’s candidacy and then his presidency did more to damage the public’s trust in the FBI than anything in recent memory.

Last week, a draft copy of an August 2018 letter written by then-Deputy FBI Director David Bowdich informing Strzok of his firing was published inside a court filing related to his 2019 wrongful termination lawsuit against the Department of Justice.

In the letter, Bowdich accused Strzok of “repeated, sustained errors of judgment.” He claimed that a review of numerous text messages between Strzok and Page made it “difficult to imagine another incident … which brought so much discredit to the organization.”

Bowdich wrote, “In my 23 years in the FBI, I have not seen a more impactful series of missteps which called into question the entire organization and more thoroughly damaged the reputation of the organization. In our role as FBI employees we sometimes make unpopular decisions, but the public should be able to examine our work and not have to question our motives.”

He continued, “In your adjudication, I removed all the politics, pundits, commentary, and the media from reporting the decision point I must address. When I strip away all the ‘noise,’ I am left with the facts and extremely damaging impact to the organization, which will take years to overcome.

Bowdich noted, “Though the Office of the Inspector General found no evidence of bias impact[ing]” FBI investigations, Strzok’s “sustained pattern of bad judgment in the use of an FBI device has called into question for many the decisions made during both the Clinton e-mail investigation and the initial states of the Russian Collusion investigation.”

A detailed list of the text messages exchanged between Strzok and Page in 2016 can be viewed in this document.

Do you have any trust left for the FBI?

It is disturbing that the OIG found no evidence that Strzok’s bias affected his investigations. Recall the long-awaited report from “straight-shooter” Michael Horowitz, the inspector general for the Department of Justice.

The comprehensive and consequential report, titled the “Review of Four FISA Applications and Other Aspects of the FBI’s Crossfire Hurricane Investigation,” released in December 2019, did much to silence Republican claims of malfeasance within the FBI.

Horowitz included a lengthy list of serious mistakes and omissions made by the FBI in their applications for a FISA warrant (and three renewals) to surveil Carter Page, a former low-level adviser to the Trump campaign. Yet he inexplicably concluded that none of them rose to the level of criminality. This allowed Democrats to boast that Trump’s claims of a political conspiracy against him by top-ranking Obama administration officials was nonsense.

According to a summary of the inspector general’s findings published by The New York Times, the report stated: “We did not find documentary or testimonial evidence that political bias or improper motivation influenced the decisions” by the FBI.

The report claimed, “Witnesses told us that they did not recall observing during these discussions any instances or indications of improper motivations or political bias on the part of the participants.”

Information and documents that have been publicly released since that time put the lie to those conclusions. Especially damning was the subsequent admission from FBI attorney Kevin Clinesmith that he’d altered a key email the bureau had included in one of the renewal applications to the FISA Court for the warrant to spy on Page.

At any rate, despite Democrats’ claims to the media that Horowitz’ report “exonerated” the FBI, Bowdich’s scathing termination letter shows that agency insiders understood the extent of their wrongdoing.

Strzok, for his part, continues to appear on CNN and MSNBC as a so-called “expert witness” on all matters related to the FBI, which can only be described as a travesty.