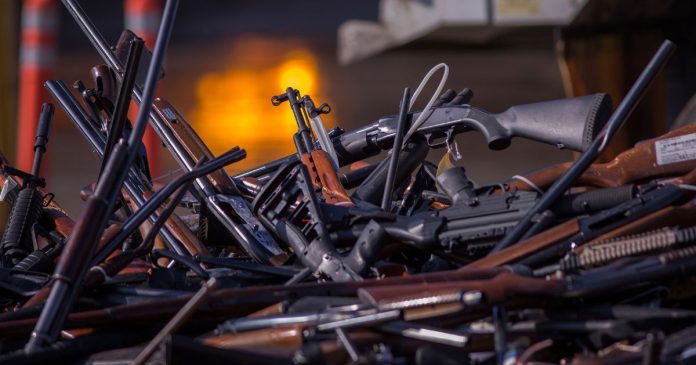 October 4, 2022
Reading time: 5 min.
Facebook
Twitter
Pinterest
WhatsApp
The Second Amendment to the United States Constitution has been a sentinel of American gun ownership since its ratification into the Bill of Rights in 1791.

Since then, it has been a major obstacle to those who wish to see guns taken out of the hands of law-abiding American citizens.

Nefarious minds have recently concocted a way to overcome that obstacle, however.

Using legislative measures collectively referred to as red flag laws or extreme risk protective orders, lawmakers have given themselves a convenient circumvention of constitutional authority under the guise of security and public protection.

While the exact wording may vary from state to state, the theme remains consistent throughout: Law-abiding citizens who have not committed a crime can have their firearms confiscated if they are vaguely deemed a “threat to themselves or others” by a sitting judge.

The state of Virginia in particular has come under scrutiny for the hundreds of firearms unconstitutionally confiscated under the 2020 Senate Bill 240, which can be viewed in full here.

“Judges have issued 257 permanent substantial risk protection orders, which confiscate the guns permanently, unless overturned through the court system.”

And those numbers are just the individuals involved. As Just the News reported, the “data does not state how many guns were confiscated from the individuals.”

Do you think that the left’s goal is to completely disarm Americans?

Red flag laws are also in direct violation of the the legal principle of presumption of innocence, wherein one is considered “innocent until they have been proven guilty,” according to Cornell Law School.

Philip Van Cleave, the president of the Virginia Citizens Defense League, said, “Red flag laws are an invention of the gun-control crowd and are unconstitutional due to their usurpation of Due Process,” Just the News reported.

Van Cleave continued, “Red flag laws are an easy way for [the] government to confiscate guns without getting a person any help or giving the person a chance to defend against any false accusations for up to two weeks … The person has no idea that they have been accused of anything until the police show up at their door to get their guns.”

He went on to explain that Virginia has two separate laws, the temporary detention order and the emergency custody order, that are more effective than red flag laws. Both laws not only allow for someone to be detained if they are presenting a risk to themselves or others, but if someone is behaving in this way due to mental illness, the orders grant them access to mental health services — which red flag laws do not.

Moreover, red flag supported raids have already had deadly consequences for those they are claiming to “help.”

According to an article from The New American, Gary Willis, of Ferndale, Maryland, answered the door at 5:17 a.m. one November morning in 2018 to two Anne Arundel County police officers. The officers were there with an “extreme protective order,” which allowed them to confiscate his “legally owned firearms.” According to a police department representative, Willis came to the door “with a gun in his hand.”

According to the The New American, Willis was killed by those police officers when he began arguing about the constitutionality of the protective order.

Local police Chief Timothy Altomare said in a press release, “If you look at this morning’s outcome, it’s tough for us to say, ‘Well, what did we prevent?’ Because we don’t know what we prevented or could’ve prevented. What would have happened if we didn’t go there at 5 a.m.?’”

An article posted by The Ron Paul Institute for Peace, titled “Red Flagged Nation: Gun Confiscation Laws Put a Target on the Back of Every American,” discussed another deadly red flag tragedy.

Duncan Lemp was killed, and his girlfriend injured after a 4:30 a.m. SWAT raid on his parents’ home on March 12, 2020. SWAT was there “to execute a ‘high risk’ search warrant for unauthorized firearms,” doing so by throwing flash bang grenades and shooting through Lemp’s bedroom window — where he was sleeping with his girlfriend. The rest of the family was also asleep in the house, and no one at the residence had a criminal record.

The article said, police conducted the raid after receiving a tip that Lemp was in possession of firearms. They justified their no-knock raid, claiming Lemp was “‘anti-government,’ ‘anti-police,’ currently in possession of body armor and an active member of … a far-right paramilitary group that discussed government resistance.”

“This is what happens when you adopt red flag gun laws, painting anyone who might be in possession of a gun — legal or otherwise — as a threat that must be neutralized,” the article’s authors wrote.

I strongly advise those reading who own guns to research if your state endorses red flag laws, so you aren’t surprised if a SWAT team kicks in your door at four in the morning to “help” you.