Kari Lake Responds to Cheney's Vow to Campaign Against Her: 'Biggest, Best Gift I Ever Received' 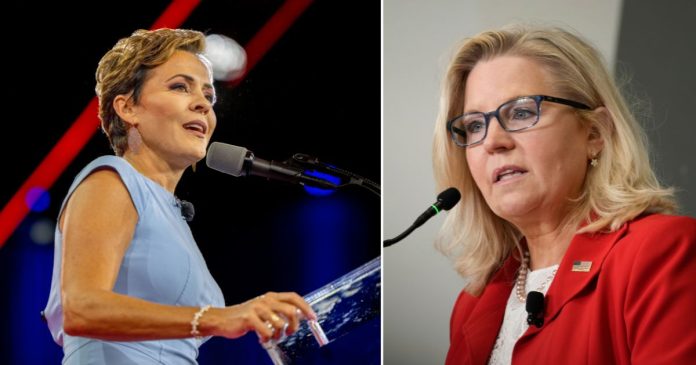 Appearing at The Texas Tribune Festival in Austin on Saturday, Cheney said, “I’m going to do everything I can to make sure Kari Lake is not elected.”

Texas Tribune CEO Evan Smith followed up and asked, “Does that include campaigning for Democrats if that’s what it takes?”

.@Liz_Cheney: “I’m going to do everything I can to make sure Kari Lake is not elected.”

Does that include campaigning for Democrats?

During the interview, the lawmaker characterized Lake as an “election denier” and “dangerous.”

Cheney — who lost her bid for re-election by over 35 percentage points last month — also chastised Virginia Republican Gov. Glenn Youngkin for planning to campaign for Lake in October.

Cheney said Youngkin is doing a “good job” as governor but that stumping for Lake is an “accommodation” that cannot be tolerated.

Lake, a former news anchor for Fox affiliate KSAZ-TV in Phoenix, enjoys a slight lead over Democrat Katie Hobbs, according to the Real Clear Politics average of polls.

Hobbs is Arizona’s secretary of state and oversaw the 2020 elections.

In the #tribfest22 interview with @evanasmith, @Liz_Cheney described @KariLake as “dangerous” and an election denier. #AZGov

Fox News host Maria Bartiromo on “Sunday Morning Futures” asked Lake, who has been endorsed by former President Donald Trump, about Cheney’s promise to campaign against her.

“That might be the biggest, best gift I’ve ever received,” Lake answered with a smile.

“I mean, the people of Wyoming can’t stand her. I’m pretty much sure that the people of Arizona don’t like Liz Cheney,” she added.

“The new Republican Party is the party of ‘We the People’; it is no longer the party of warmongers, and so Liz Cheney probably should change her voter registration. Turns out she really is a Democrat after all,” Lake said.

Cheney serves as vice chair of the Jan. 6 committee.

House Speaker Nancy Pelosi appointed her and Rep. Adam Kinzinger of Illinois, who are both strongly anti-Trump, as the only Republicans on the panel.

Cheney also pledged at The Tribune Festival that she will do all she can to keep Trump from becoming the 2024 GOP presidential nominee. If he is, she said, “I won’t be a Republican.”

A version of this article originally appeared on Patriot Project.