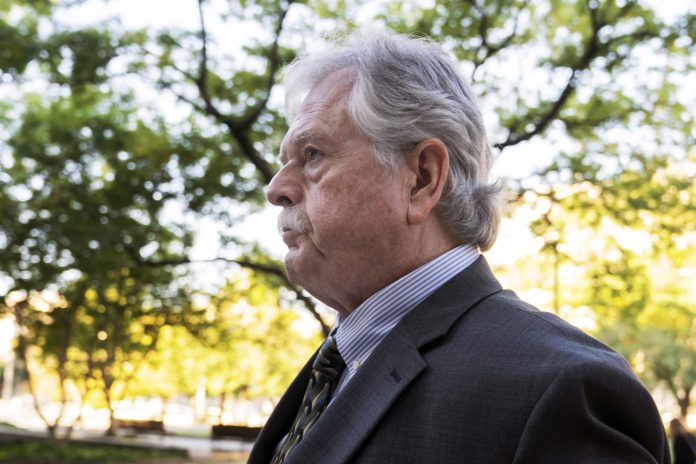 October 3, 2022
Reading time: 4 min.
Facebook
Twitter
Pinterest
WhatsApp
The founder of the Oath Keepers and four associates are on trial for the Capitol incursion on charges that include seditious conspiracy — a rarely used Civil War-era accusation.

Prosecutors claim this Civil War-era charge strikes to the heart of what happened that day, which they believe was a coordinated effort to stop the transfer of presidential power.

Stewart Rhodes and his followers are the first Jan. 6 defendants to stand trial on such a charge.

The Justice Department hasn’t tried a seditious conspiracy case in a decade and hasn’t won a guilty verdict since the 1995 prosecution of Islamic militants who plotted to bomb New York City landmarks.

Prosecutors claim Rhodes and the Oath Keepers spent weeks preparing to stop Biden from becoming president. Rhodes, a Texan, allegedly recruited members to come to Washington, amassed weapons and organized armed teams to be on standby outside the city in case they were needed, authorities say.

The plot came to a head, according to prosecutors, on Jan. 6 when Oath Keepers were captured on camera moving through the crowd of President Donald Trump’s supporters and moving into the Capitol in military-style stack formation.

The Oath Keepers, for their part, have said their preparations, training, gear and weapons were to protect themselves against potential attacks from left-wing antifa activists or to be ready if Trump invoked the Insurrection Act to call up a militia to support his bid to stay in power. Rhodes said there was no plan to attack the Capitol, and the members who went inside went rogue.

Jury selection started on Tuesday for the trial that is expected to last several weeks.

Here’s a look at the charge of seditious conspiracy and its history:

Is the DOJ grasping at straws to prosecute Jan. 6 participants?

WHAT IS SEDITIOUS CONSPIRACY?

The law was enacted after the Civil War to arrest Southerners who might keep fighting the U.S. government.

In order to win a seditious conspiracy case, prosecutors have to prove that two or more people conspired to “overthrow, put down or to destroy by force” the U.S. government or bring war against it or that they plotted to use force to oppose the authority of the government or to block the execution of a law.

Instead, prosecutors charge that they conspired to forcibly oppose the authority of the federal government and forcibly block the execution of laws governing the transfer of presidential power.

Specifically, the Oath Keepers are accused of conspiring to forcibly obstruct the execution of the Electoral Count Act and the Twelfth Amendment of the Constitution, which address the counting of electoral votes.

Seditious conspiracy calls for up to up to 20 years behind bars, if convicted. Rhodes and his associates also face several other serious charges.

WHO FACES SIMILAR CHARGES IN THE JAN. 6 ATTACK?

A total of nine members or associates of the Oath Keepers are fighting seditious conspiracy charges. A second trial for the other Oath Keepers charged in the case is to begin at the end of November.

Three other Oath Keepers have already pleaded guilty to seditious conspiracy, are cooperating with investigators and could testify against Rhodes at trial. Rhodes’ lawyers have claimed in court documents that those Oath Keepers are lying and pleaded guilty only because they were pressured by the government and hoped to get lighter sentences.

Several members of the Proud Boys have also been charged with the crime, including former chairman Henry “Enrique” Tarrio. They are scheduled to stand trial in December.