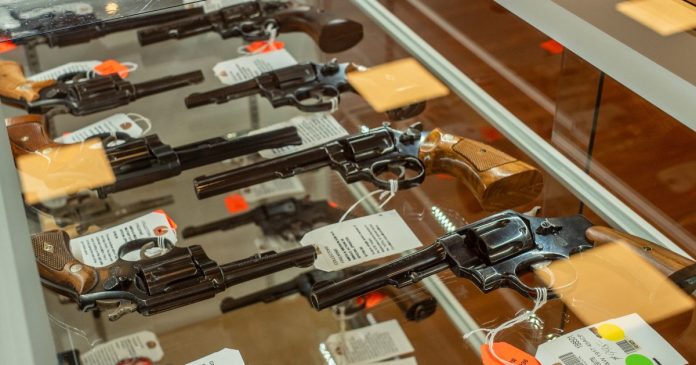 October 3, 2022
Reading time: 4 min.
Facebook
Twitter
Pinterest
WhatsApp
The international organization responsible for creating merchant category codes for credit card purchases has given its approval to establish one for transactions made at gun stores.

The International Organization for Standardization’s Registration and Maintenance Management Group met on Wednesday to discuss a request made by Amalgamated Bank to set up such a code.

An ISO spokesperson told The Center Square that RMMG members could not decide whether to approve the application. That elevated the discussion to the ISO leadership that oversees standards for retail financial services.

“Considering the application met all the criteria from ISO 18245 and no material arguments pertaining to the approval criteria outlined in the ISO 18245 standard to reject the code were made, SC9 leadership has approved this MCC application in order to comply with the standard,” the ISO said in a statement provided by Maria Lazarte, the organization’s team leader for media and engagement.

That decision came less than a week after New York Attorney General Letitia James and California Attorney General Rob Bonta sent a letter to chief executives at American Express, Mastercard and Visa, urging them to support a merchant category code.

They were joined on Wednesday morning by New York Gov. Kathy Hochul, who tweeted in support of an MCC.

In a statement late Friday afternoon, James celebrated the ruling, claiming it would prevent tragedies.

“Labeling gun and ammunition sales is a responsible, common-sense way to help protect Americans, and I thank Amalgamated Bank for their bold leadership on this critical issue,” James said. “I urge credit card companies to take the next step and flag suspicious transactions on gun and ammunition sales, like they do for fraud and money laundering.”

Do you plan to start making gun purchases with cash instead of credit or debit cards?

In a statement to The Center Square, Mark Oliva, the organization’s managing director for public affairs, slammed the move, saying the creation of the code was “flawed on its premise. Those who believe it will help law enforcement do not provide details on what should be considered suspicious purchases.”

“This decision chills the free exercise of Constitutionally-protected rights and does nothing to assist law enforcement with crime prevention or holding criminals accountable,” he said. “The Department of Justice’s Bureau of Justice Statistics consistently shows in their own reporting that 90% of felons convicted of their crimes involving a firearm admit they illegally obtain those guns through theft or trading on the black market.

“Attaching codes specific to firearm and ammunition purchases casts a dark pall by gun control advocates who are only interested in disarming lawful gun owners.”

Oliva added supporters of the MCC actually hope to stop purchases of guns and ammunition through credit cards.

“Credit card companies have previously publicly resisted this because they understand it is not in their interest to monitor lawful private purchases,” he added.

It’s uncertain at this time when the MCC would take effect.

American Express, through a statement provided by Vice President of Corporate Affairs and Communications Andrew Johnson, said that it will follow the standard business practices, as it does anytime the ISO develops a new MCC.

“It is important to note that MCC codes are one of many data points that help us understand the industries in which our merchants operate,” the statement read.

“We are focused on ensuring that we have the right controls in place to meet our regulatory and fiduciary responsibilities, as well as prevent illegal activity​ on our network.”

A version of this article first appeared at The Center Square.

The Center Square was launched in May 2019 to fulfill the need for high-quality statehouse and statewide news across the United States. The focus of our work is state- and local-level government and economic reporting. A taxpayer sensibility distinguishes our work from other coverage of state and local issues. As a result of this approach, our readers are better informed about the focus of state and local government and its cost to the citizens whose tax dollars fund governmental decisions.