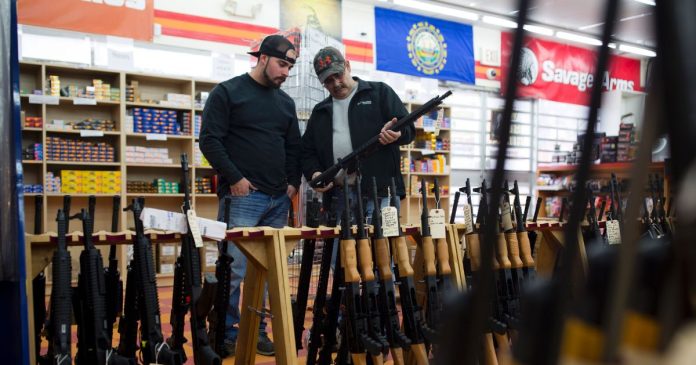 October 2, 2022
Reading time: 4 min.
Facebook
Twitter
Pinterest
WhatsApp
Visa, Mastercard and American Express will all be using the code as a way to track consumer credit card purchases for these items at United States gun stores.

Patronis has released a statement in which he said Florida will take action against the credit card companies using the code in the state of Florida.

“The second amendment is foundational to our American way of life. The idea that law-abiding Americans would be put on some kind of corporate watchlist is disturbing.

“Our rights come from our Creator, not the government, and especially not big corporations. It is clear that the actions by these credit card companies are part of a larger effort to curtail God-given constitutional rights of Americans.

“It is also symptomatic of the virus known as ESG, which is part of a global effort to socially re-engineer the country that we love so much. There is no way we are going to allow that to happen in the free state of Florida,” Patronis said.

“If we come to the legislative session and companies like Visa, Mastercard and American Express are generating these reports to create a chilling effect against the purchase of firearms, then I’ll work with the Legislature to pass a law penalizing businesses who are targeting the right to bear arms,” Patronis said.

He added, “We’ve seen a groundbreaking ruling come out of the Fifth Circuit limiting corporations’ ability to curtail American’s constitutional rights, so we are on solid legal footing to pursue a bill protecting Floridians 2nd Amendment Rights.

“We can also take it a step further by barring these companies from doing any business with the State of Florida. We will send a message out to these large corporations that if you are interested in doing business with Florida, you need to make sure that you’re protecting Floridians right to arm and defend themselves.”

Patronis is not alone in his decision to reject the merchant code.

There are attorneys generals from a total of 24 states who are not in agreement with credit card companies using the new merchant code.

They have sent a letter to CEOs at American Express, Mastercard and Visa arguing that the move will not protect public safety.

They believe it will just provide a list of gun buyers that may be used inappropriately, according to WLOX.

Attorney generals in New York and California have publicly expressed their support of the new code, as well as Dem. Senators Elizabeth Warren and Ed Markey of Massachusetts, according to CNBC.

The National Rifle Association (NRA) has expressed its opposition to the new merchant code, indicating on its website that the collection of the information, “amounts to surveillance and registration of law-abiding gun owners.”

The NRA further believes that “it should be assumed that the goal of this program is to share all collected firearm retailer MCC data with government authorities and potentially private third parties that may include gun control organizations and anti-gun researchers.”

The NRA also indicated that it believes the tracking system has great potential for “political abuse,” and would also interfere with the First Amendment rights of gun owners.

Elizabeth has been a freelance content writer for about 20 years and has enjoyed having her prose published in both the non-fiction and fiction markets. She has written a variety of different types of content, including Christian articles, healthy lifestyle, blog posts, business topics, news articles, product descriptions, and some fiction. She is also a singer-songwriter-musician. When she’s not busy with writing or music, she enjoys spending time with friends or family and doing fun social activities such as hiking, swing dancing, attending concerts and other fun social activities.