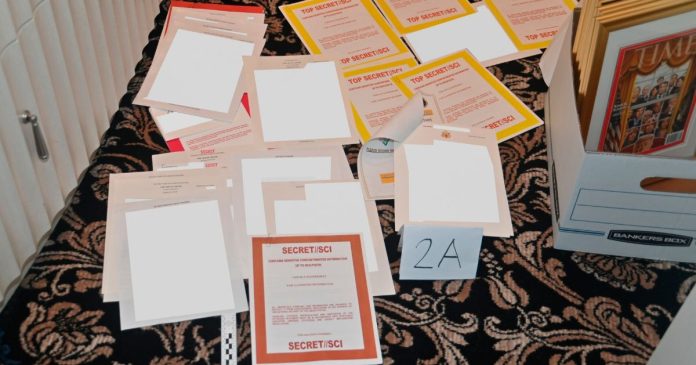 October 2, 2022
Reading time: 2 min.
Facebook
Twitter
Pinterest
WhatsApp
The updated inventory reveals that the Bureau seized 63 additional documents and photographs from former President Trump’s Florida home. These additional materials were not labeled as classified, according to The Epoch Times.

Since the controversial raid last month, the FBI has faced a slew of questions as to the justification for the search and calls to provide transparency on the matter.

The initial inventory was submitted on Sept. 2. U.S. District Judge Raymond Dearie, who has been assigned to the case as a special master, then ordered the government to provide a written affidavit confirming that the inventory was accurate and complete.

The order was fulfilled by FBI agents who conducted an additional review of the seized materials. This review revealed the additional documents, which were listed in an updated inventory provided on Monday.

If the latest inventory is correct, it would bring the total number of non-classified materials seized to over 11,200, according to the Times. The initial list included 103 items marked as classified.

In all, 16 items saw changes in the updated inventory. In one example, Item 18 shows a slight increase in the amount of non-classified material seized. Most of the changes follow this pattern throughout the updated list.

The supervisory FBI agent in charge of the review, whose name was redacted, acknowledged these “minor revisions.” Under penalty of perjury, the agent stated that they were not aware of any documents taken from Trump’s home that were not included in the new inventory.

The supervisory agent stated that their team was focused on identifying and separating materials that they deemed could fall under attorney-client privilege.

Do you think the Mar-a-Lago raid was justified?

The updated inventory does contain a noticeable absence of information, namely the exclusion of the documents marked as classified. This is due to a recent appeals court order that blocked both Dearie and Trump’s lawyers from reviewing such documents.

No one from Trump’s team has responded to these latest developments.