DeSantis Silences Reporter Who Tries to Politicize Hurricane Ian: 'Whoa, Whoa, Whoa, Give Me a Break' 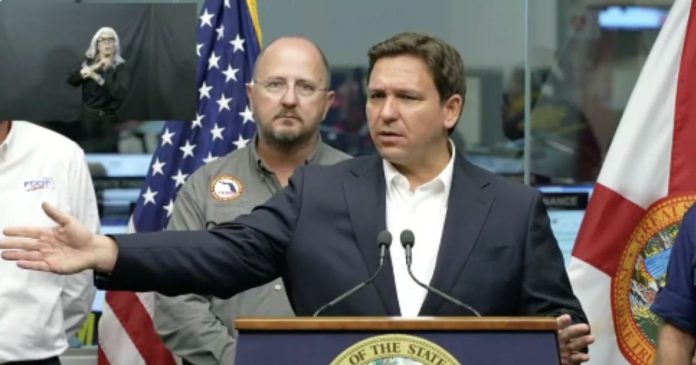 As some members of the news media gleefully rub their hands together preparing for Part Two of “Let’s Take Down a Republican due to a Hurricane,” Florida Gov. Ron DeSantis is wise to them.

“That is nonsense. Stop politicizing, okay?” the governor said. “Stop it!”

There’ll be no rolling of this guy as there was of President George W. Bush following Hurricane Katrina in 2005.

In reality, FEMA Administrator Deanne Criswell indicated a close working relationship between her office and Florida officials, as she urged Floridians — especially those who have never experienced a hurricane — to pay close attention to the instructions of local authorities.

Midday Wednesday, category 4 Ian was making landfall in southwest Florida, with winds gusting to 112 mph at Naples Grande Beach Resort and 107 mph near Sanibel Island, according to The Weather Channel.

The storm also was affecting Florida’s east coast, with a gust of 54 mph at Cape Canaveral and in the south, Key West had its third-largest storm surge since 1913.

Do you think the left is trying to politicize Hurricane Ian?

At a news conference, a reporter queried DeSantis on the state’s response to the storm.

Reporter: “FEMA Administrator Criswell said today that she acknowledged concerns that Florida, as we said, lacks response to the storm so far and that…”

“We declared a state of emergency when this thing wasn’t even formed.

“We’ve had people in here – you’ve had counties doing, they’ve done a lot of hard work, and, honestly, you’re trying to attack me, I get, but you’re attacking these other people who’ve worked very hard and so, that’s just totally false.

“I don’t think we’ve ever – certainly since I’ve been governor – declared a state of emergency this early. We made sure we were very inclusive with it. We said there was a lot of uncertainty and then we’ve worked to make sure the preparations have been done and all this stuff.”

At another news conference in Washington, Criswell was asked about complacency in Florida.

“I do have concerns about complacency,” she replied, but as she expanded her answer she seemed to be addressing complacency among Florida residents inexperienced with hurricanes as opposed to an apparent inference of complacency among state officials.

“We’re talking about impacts in a part of Florida that hasn’t seen a major direct impact in nearly a hundred years,” Criswell said. “There’s also parts of Florida where there’s a lot of new residents that have never experienced this type of threat.

“So my message to them is: take this very seriously. Listen to your local officials and [to] those Floridians who have been through this before: help your neighbors who may not have had to go through this.”

Criswell said President Biden early on had instructed her to be in contact with DeSantis and that FEMA’s regional administrator was with the governor and there was focus on saving lives.

So far, the media’s oft-repeated game of let’s-you-and-him-fight (especially where a Republican is involved) is going nowhere.

In the face of Ian, DeSantis has to be aware he’s a political target, given the media attacks on Bush surrounding Katrina.

But with mid-terms approaching, the White House may be treading softly, realizing that while they can stir up the leftist base by attacking what they call MAGA Republicans, politicizing a natural disaster may be, even for them, beyond the pale.

As members of the leftist base, some in the media, of course, have no such reservations, so they attempt to pack political grenades in their questions.

And Ron DeSantis (“Whoa, whoa, whoa. Stop it!”) tosses them right back.

CORRECTION, Sept. 29, 2022: The Western Journal has corrected a misspelling in the headline of this commentary.