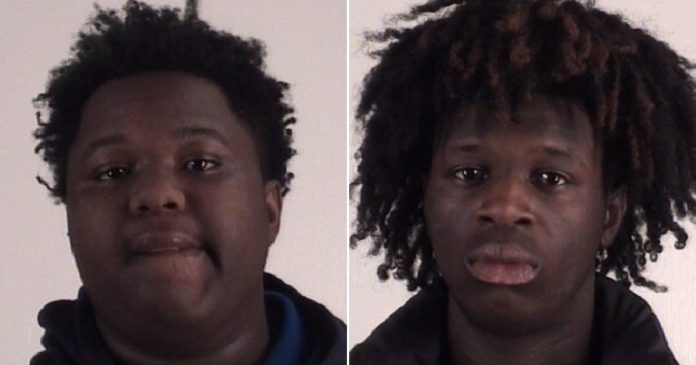 Waybourn said a tipster informed one of his deputies that “there was a person heading toward homecoming at Everman and intended to shoot people there.”

Authorities said Brandon Gipson and Isaac Cooper, both 18, had planned to shoot multiple people at a Sept. 16 homecoming football game at Everman High School in Everman, a suburb of Fort Worth.

Thanks to a confidential informant who had knowledge of the deadly plot, law enforcement arrested Cooper and Gipson in the high school parking lot about 43 minutes after the tip was called in.

“We put a stop to something before it got started,” the sheriff told KDFW.

The teens were charged with three felonies: unlawfully carrying a firearm in a prohibited place, child endangerment and making a terroristic threat in a public place.

NEW: Brandon Gipson and Isac Cooper — left to right — are the two who the @tarrantcountyso says planned to carry out a shooting at the Everman H.S. football game, Friday, that could’ve resulted in “mass casualties.” An AR-15 and 60-round magazine were found in their car. @FOX4 pic.twitter.com/slIGJrjwGm

Police said they confiscated an AR pistol and a fully loaded 60-round magazine with metal-piercing ammunition from the suspects’ vehicle.

Gipson had purchased the gun illegally on the streets, according to the sheriff.

A 14-year-old boy who was in the car with the suspects was not charged.

The @tarrantcountyso provided this photo of the AR-15, magazine and ammunition they say Gipson and Cooper had in their vehicle at the Everman H.S. football game, Friday. Investigators believe they planned to shoot multiple people inside the game. @FOX4 pic.twitter.com/IlGoYzf1Yd

Waybourn credited Sgt. Chris Salone for fielding the tip, which he attributed to the deputy’s Herculean efforts in nurturing confidential informants in the neighborhood.

“He’s out there in the community,” the sheriff told KDFW. “He’s always searching for fugitives, and this person has helped him in the past in similar incidents. So that’s how they gained that credibility.”

Investigators are not sure who the intended targets of the potential mass shooting were but said it might have stemmed from a gang rivalry.

Should police funding be a top priority for cities and local governments?

This incident is yet another chilling reminder of how fractured and damaged our society has become and how important it is to have a functioning police force.

Teenagers illegally acquired guns and ammunition with the sole intent of shooting numerous people at a crowded public event, according to authorities.

Had it not been for a conscientious good Samaritan and an astute police officer, another tragic mass shooting could have occurred.

This is also another indictment of the leftists’ reckless demonization of police and their toothless “gun control” policies that don’t prevent criminals from illegally acquiring firearms.

By now, it is painfully obvious that the Democrats’ “defund the police” hysteria, soft-on-crime policies and anti-Second Amendment initiatives do not curb crime but incentivize it.

If you need more proof, look no further than the liberal city of Chicago, where 34 people were shot, six fatally, this weekend alone.

This horrific violence is so common in Mayor Lori Lightfoot’s crime-infested city that CNN, MSNBC, The Washington Post and The New York Times don’t even bother to report it.

The establishment media’s deafening silence on these recurring, politically inconvenient murders tells you all you need to know about their — and the Democratic Party’s — warped priorities.