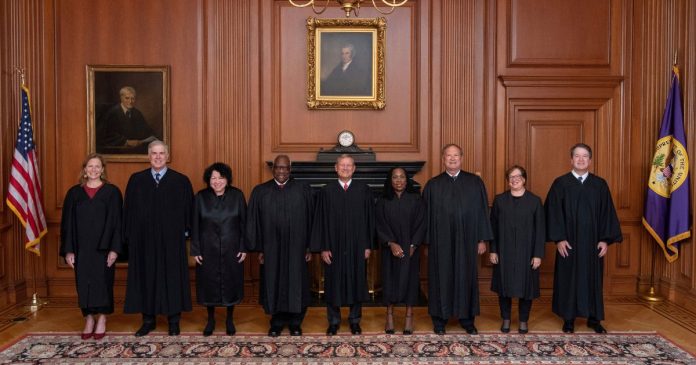 October 2, 2022
Reading time: 7 min.
Facebook
Twitter
Pinterest
WhatsApp
With public confidence diminished and justices sparring openly over the institution’s legitimacy, the Supreme Court on Monday will begin a new term that could push American law to the right on issues of race, voting and the environment.

Following June’s momentous overturning of Roe v. Wade, the court is diving back in with an aggressive agenda that seems likely to split its six conservative justices from its three liberals.

“It’s not going to be a sleepy term,” said Allison Orr Larsen, a William and Mary law professor. “Cases the court already has agreed to hear really have the potential to bring some pretty significant changes to the law.”

Into this swirling mix steps new Justice Ketanji Brown Jackson, the court’s first black woman. Jackson took the seat of Justice Stephen Breyer, a member of the court’s liberal wing, who retired in June. She’s not expected to alter the liberal-conservative divide on the court, but for the first time the court has four women as justices.

The court, with three appointees of then-President Donald Trump, could discard decades of decisions that allow colleges to take account of race in admissions.

In a separate elections case, a Republican-led appeal could dramatically change the way elections for Congress and the presidency are conducted by handing more power to state legislatures and taking it away from state courts.

Also on the agenda is a clash over the rights of a business owner with a religious objection to working with same-sex couples on their weddings.

In the term’s first arguments Monday, the justices are being asked to limit the reach of the Clean Water Act, the nation’s main law to combat water pollution.

The case involves an Idaho couple who won an earlier high court round in their bid to build a house on property near a lake without getting a permit under that law.

Will the Supreme Court deliver another win for conservatives this term?

The outcome could change the rules for millions of acres of property that contain wetlands.

A Supreme Court decision for the couple could strip environmental protections from 45 million acres and threaten water quality for millions of people, said Sam Sankar, senior vice president of the Earthjustice environmental group.

But Damien Schiff, representing the couple, said a favorable court ruling could free ordinary property owners from worrying about large fines and years of delays. “You don’t have to be a large industrial company or large property owner to have a problem,” Schiff said.

“It is most certainly an uphill climb. We’re in a scary place where we are relying on Justice Roberts,” Archer said.

Her assessment stems from Chief Justice John Roberts’ long-standing support, both as a judge and a White House lawyer in the 1980s, for limits on considerations of race in education and voting.

“It’s a sordid business, this divvying us up by race,” Roberts wrote in a 2006 redistricting case from Texas.

Last term’s epic decisions might have produced bruised feelings among the justices anyway. But the leak of the abortion decision in early May, seven weeks before it was released, exacerbated tensions on the court, several justices have said. The court has apparently not identified the source of the leak, Breyer said in a recent interview on CNN.

Justice Elena Kagan delivered a series of talks over the summer in which she said the public’s view of the court can be damaged especially when changes in its membership lead to big changes in the law.

“It just doesn’t look like law when some new judges appointed by a new president come in and start just tossing out the old stuff,” Kagan said in an appearance last month at Salve Regina University in Newport, Rhode Island.

Roberts and Justice Samuel Alito both took issue with Kagan. Roberts said it was wrong to equate disagreement with the court’s decisions with questions of legitimacy.

In a comment Tuesday to The Wall Street Journal, Alito didn’t name Kagan. “But saying or implying that the court is becoming an illegitimate institution or questioning our integrity crosses an important line,” he said, according to the newspaper.

Separately, Virginia “Ginni” Thomas, the wife of Justice Clarence Thomas, was interviewed on Thursday by the House committee investigating the Jan. 6 incursion. She stood by the claim that the 2020 election was fraudulent, according to the committee chairman, Democratic Rep. Bennie Thompson of Mississippi.

Ginni Thomas, a longtime conservative activist, texted with White House chief of staff Mark Meadows and contacted lawmakers in Arizona and Wisconsin in the weeks after the election. In January, her husband was the only justice to vote to keep documents from the National Archives out of the committee’s hands.

Polls have shown a dip in approval for the court and respect for it. The latest Gallup Poll, released last week, reflected Americans’ lowest level of trust in the court in 50 years and a record-tying low approval rating.

In a talk to judges and lawyers in Colorado last month, Roberts reflected on the last year at the court, calling it “an unusual one and difficult in many respects.” Following the leak, the court was ringed with an 8-foot security fence, and Roberts called it “gut-wrenching” to drive to work past the barricades.

He also said it was “unnatural” to hear arguments without the public present, a concession to the coronavirus pandemic.

Now the barricades are down and the public will be allowed inside the courtroom for arguments for the first time since March 2020. The court will keep one pandemic practice — broadcasting live audio of arguments.

Roberts seemed eager to look ahead. “I think just moving forward from things that were unfortunate in the year is the best way to respond to it,” he said.

Last term, the court moved “firmly in a rightward direction,” said Irv Gornstein, executive director of the Supreme Court Institute at Georgetown University’s law school. “There is no reason to think this coming term or any term in the foreseeable future will be any different.”