Biden's Leadership So Weak, Trump Offers to Jump in and Help Strike a Peace Deal: 'Entire World Is at Stake' 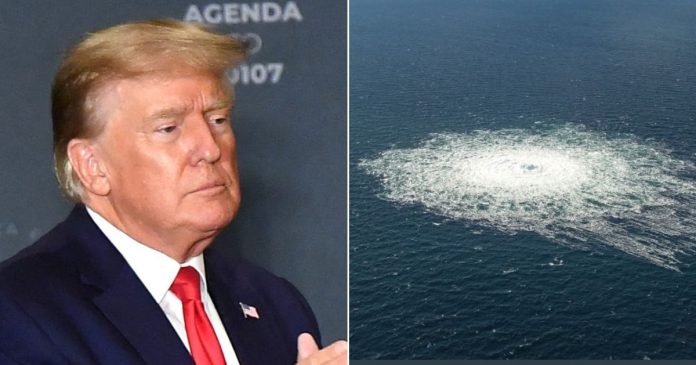 October 2, 2022
Reading time: 7 min.
Facebook
Twitter
Pinterest
WhatsApp
Former President Donald Trump is so worried about Russia’s war in Ukraine that he has jumped in to offer his help to try and stave off what he said could be another world war.The ex-president’s worries over a world war started with his musings on the potential sabotage of the Nord Stream natural pipelines from Russia to Germany. On his Truth social site, he posted his fears that the gas pipeline situation could “lead to a major escalation.”

“Everyone is talking about the big hurricane barreling into Florida, as they should be,” Trump wrote on Wednesday morning, “but perhaps a far more important event in the longer term was the announcement that the Nord Stream I & II Pipelines out of Russia (which I brought to the World’s attention as President when I explained how crippling reliance on it could be for Germany and other parts of Europe. Everybody laughed at the time, but they are not laughing anymore!) has been SABOTAGED. This could lead to major escalation, or War!”

According to Reuters, the Nord Stream 2 leak was spotted in the Baltic Sea where the pipeline sits a kilometer down under the surface.

Gas bubbles from the Nord Stream 2 leak reaching the surface of the Baltic Sea show disturbance of well over one kilometer diameter near Bornholm, Denmark.

Meanwhile, two leaks were reported at Nord Stream 1, another natural gas pipeline from Russia to German that was completed in 2011.

Do you think Trump helped maintain peace among nations while he was president?

That pipeline was not operating even before the leaks were reported because Russia maintains that it needs repairs that are being hindered by European sanctions imposed after its invasion of Ukraine.

It’s important to point out that while there is widespread talk that the pipelines were sabotaged, that hasn’t been publicly established yet.

Still, the problems befalling the Nord Stream pipelines — and speculations they were caused by sabotage — were so shocking that Fox News host Tucker Carlson wondered aloud if Joe Biden’s administration is somehow responsible.

In his monologue on Tuesday’s “Tucker Carlson Tonight,” Carlson noted that “Joe Biden suggested on camera that he might take out these pipelines.”

He played a clip of a Biden news conference Feb. 7 with German Chancellor Olaf Schulz where, as NPR, reported at the time, Biden said, “If Russia invades, that means tanks or troops crossing the border of Ukraine again, there will no longer be a Nord Stream 2. We will bring an end to it.”

“Notice how he phrased that. He’s the president. He doesn’t phrase things by accident, particularly when he’s reading off cards,” Carlson added. “He didn’t say, ‘I will pause the delivery of gas from Russia to Germany.’ He said there won’t be a Nord Stream 2. We’ll put an end to it. We’ll take it out. We’ll blow it up.”

Trump wasn’t done with his Wednesday posts about the situation in Eastern Europe. He addressed the issue moments later in a second post saying that “the entire world is at stake” and offering to lead the negotiations of peace between Russia and Ukraine.

“U.S. ‘Leadership’ should remain ‘cool, calm, and dry’ on the SABOTAGE of the Nord Stream Pipelines. This is a big event that should not entail a big solution, at least not yet. The Russia/Ukraine catastrophe should NEVER have happened, and would definitely not have happened if I were President. Do not make matters worse with the pipeline blowup. Be strategic, be smart (brilliant!), get a negotiated deal done NOW. Both sides need and want it. The entire World is at stake. I will head up group???” Trump wrote on Wednesday.

Trump seems truly alarmed at Biden’s failure to prevent Russia’s brutal invasion of Ukraine and he seems legitimately worried that the situation there could develop into a world war as surrounding NATO-affiliated countries become threatened by belligerent Russian invaders.

Furthermore, Trump would seem to be the ideal man to lead peace talks between Russia and Ukraine. Liberals and the mainstream media would never admit it, but he compiled an impressive record of peacemaking during his presidency and, unlike past presidents, he did little to spread war.

Indeed, in 2020, Kosovo’s president awarded Trump with one of his country’s highest honors for our then-president’s efforts on peace and reconciliation in the formerly war-torn area.

President Hashim Thaci awarded Trump with Kosovo’s Order of Freedom “for his exceptional contribution for the freedom of Kosovo and the strengthening of peace and reconciliation in the region.”

Trump’s efforts to foster peace also extended into the Middle East where he presided over the signing of historic diplomatic pacts between Israel and the United Arab Emirates and Bahrain that he hoped would lead to a new order in the Middle East.

Trump’s success in the region was one of the most extensive of any president’s achievements in the Mid East.

The warring factions in Afghanistan also met in formal talks to talk peace during Trump’s presidency. That effort was bearing fruit until Joe Biden threw it all away with his precipitous withdrawal from the country, giving the vicious Taliban an avenue back to power.

Trump has noted several times that the war in Ukraine would never have happened if he were still president. In fact, even the voters agree. In March a poll found that a majority felt that Putin would not have invaded Ukraine if Trump was in the White House, The Hill columnist Joe Concha wrote at the time.

With Trump’s track record of successful peace negotiations and his record of prognostications later proven true, we should pay serious attention to his worries over the war in Ukraine.

Biden won’t do it, of course, but he should take Trump’s proposal of acting as a go-between for Russia and Ukraine as a serious offer.